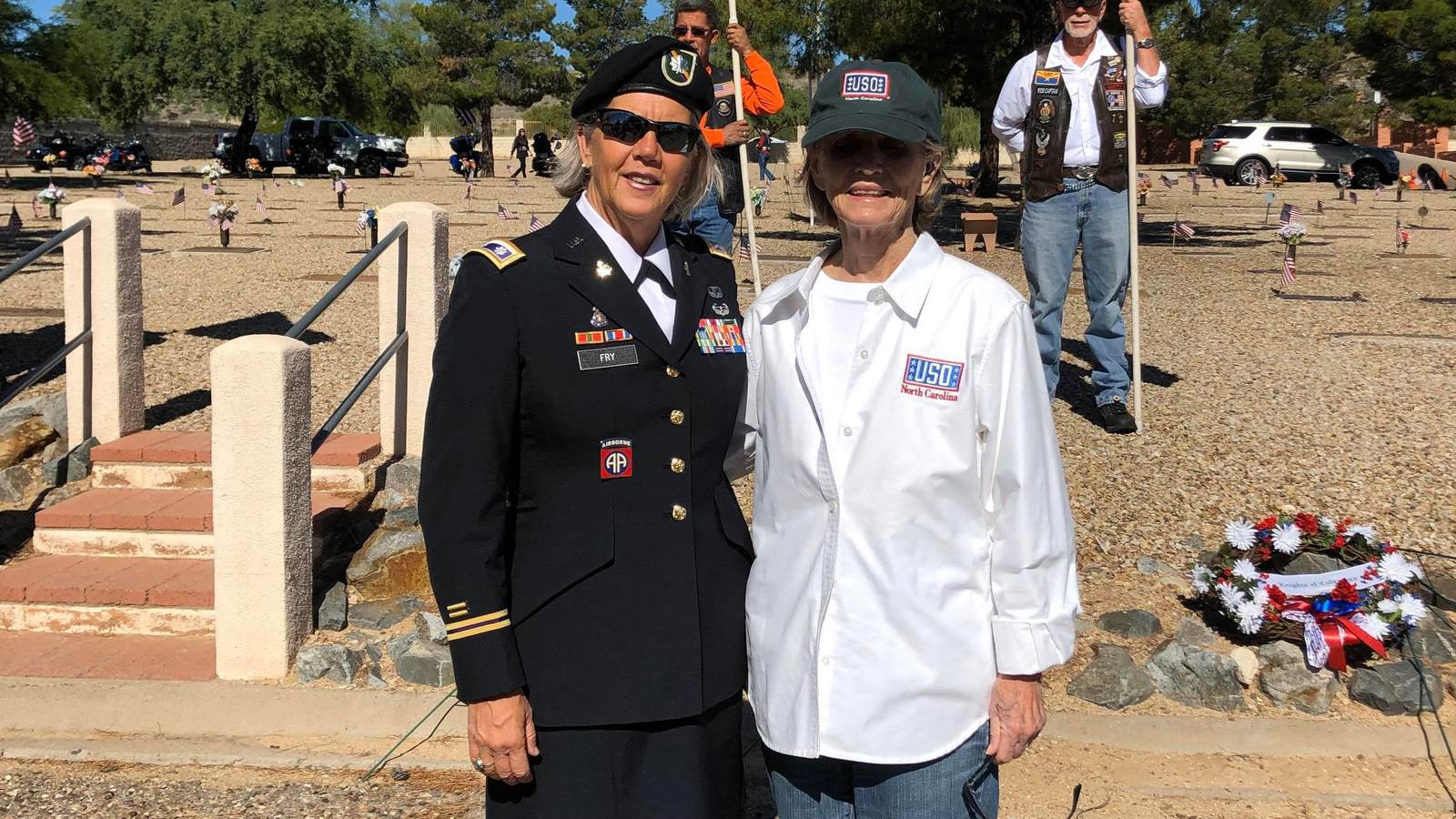 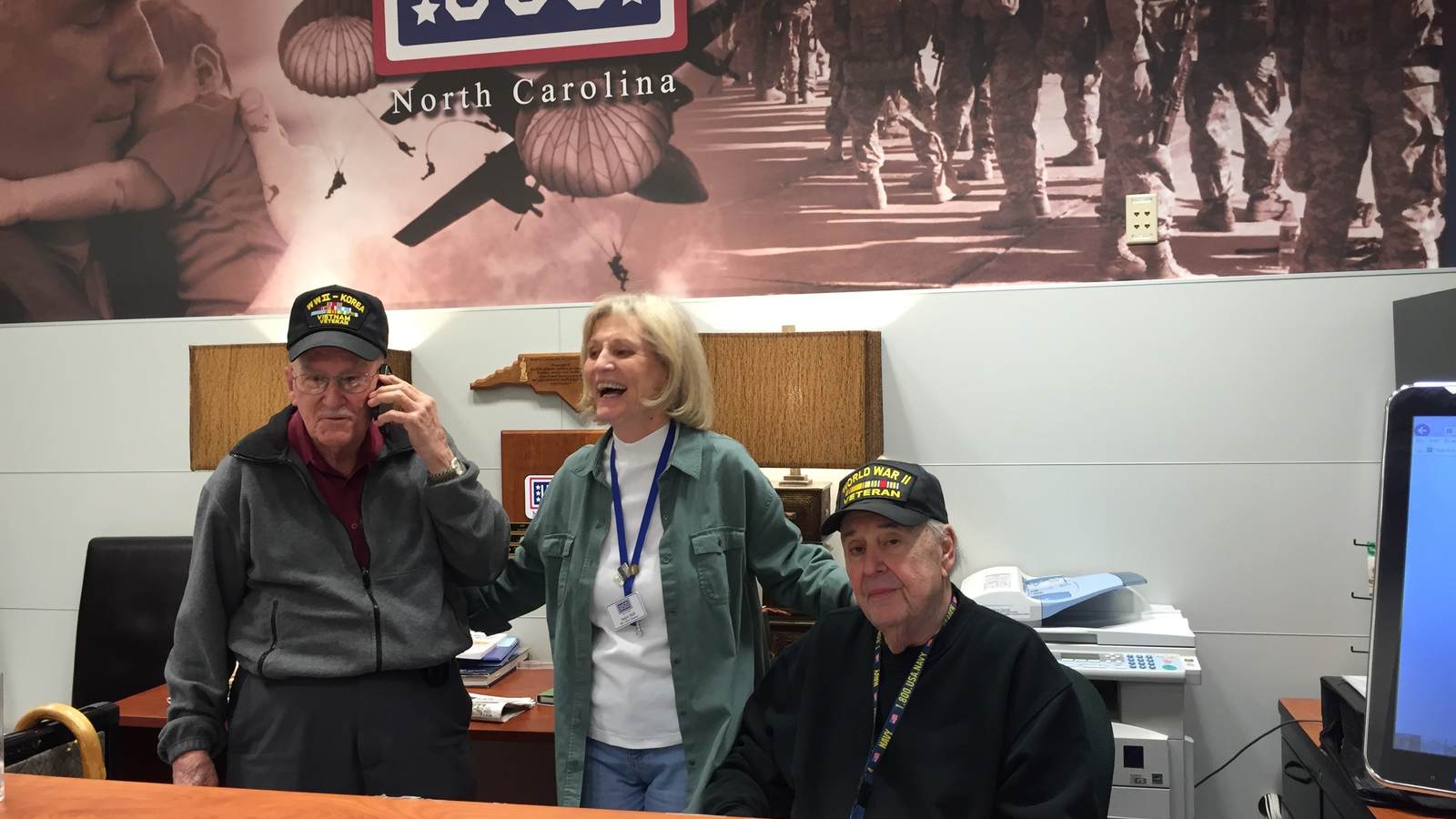 Angela Fry Bull (centered) a former USO of North Carolina volunteer with the Raleigh-Durham International Airport (RDU) center from 2005-2016, posses with fellow USO of NC volunteers, at the USO of NC RDU center. Angela volunteered two days a week at the USO of NC RDU center for 11 years helping service members and their families passing through the airport. Angela is one of the original founders of the Harris Teeter Support Our Troops campaign, and since 2012, Harris Teeter has helped raise over $8.6 million dollars for the USO and its mission. Photo courtesy of Maureen Fry. 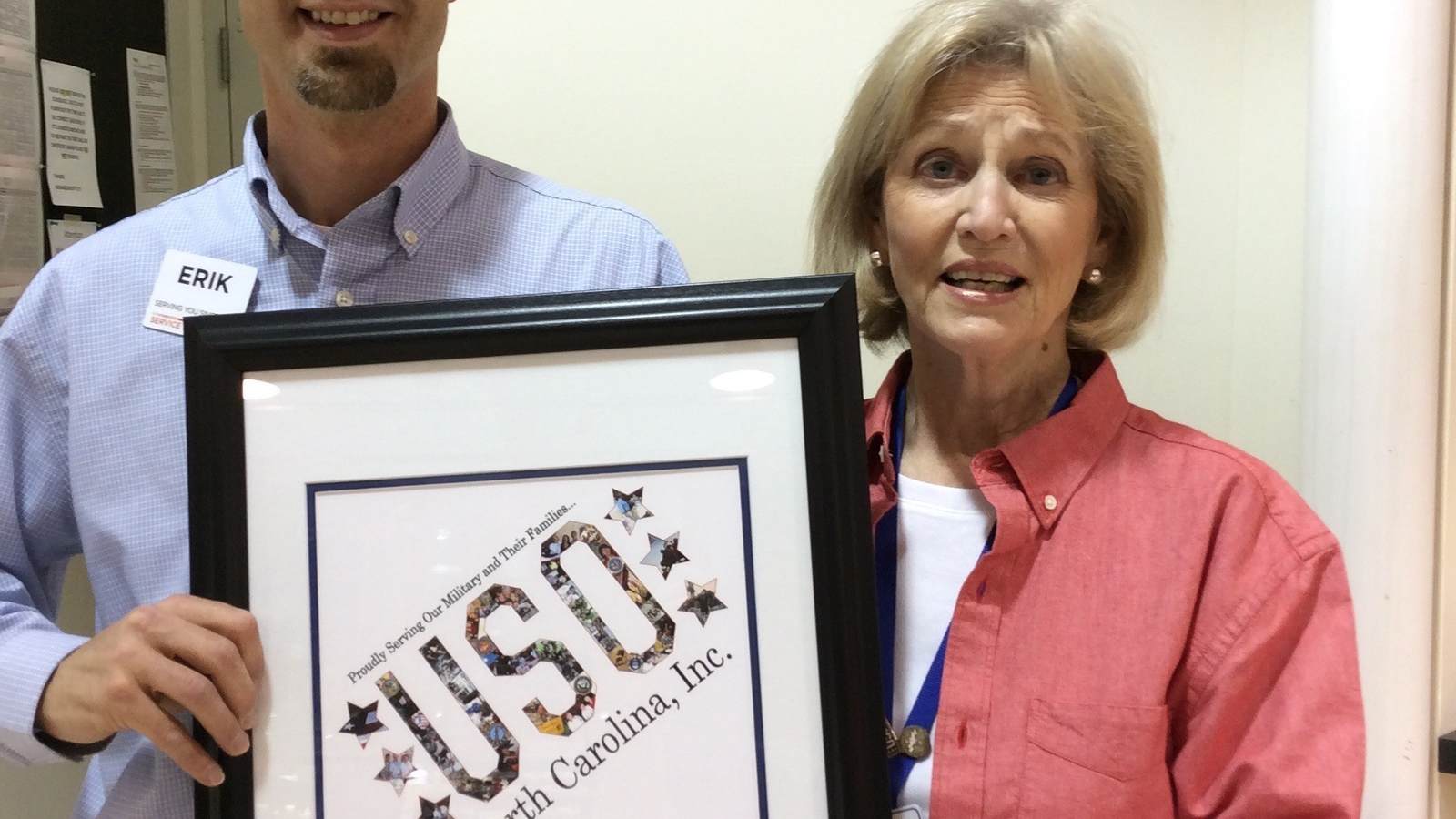 Angela Fry Bull (right) a former USO of North Carolina volunteer at the Raleigh-Durham International Airport (RDU), center from 2005-2016, posses with Erik, a Harris Teeter Store manager, after presenting a framed USO of NC partnership photo. Since 2012, Harris Teeter has helped raise over $8.6 million dollars for the USO and its mission. Photo courtesy of Maureen Fry. 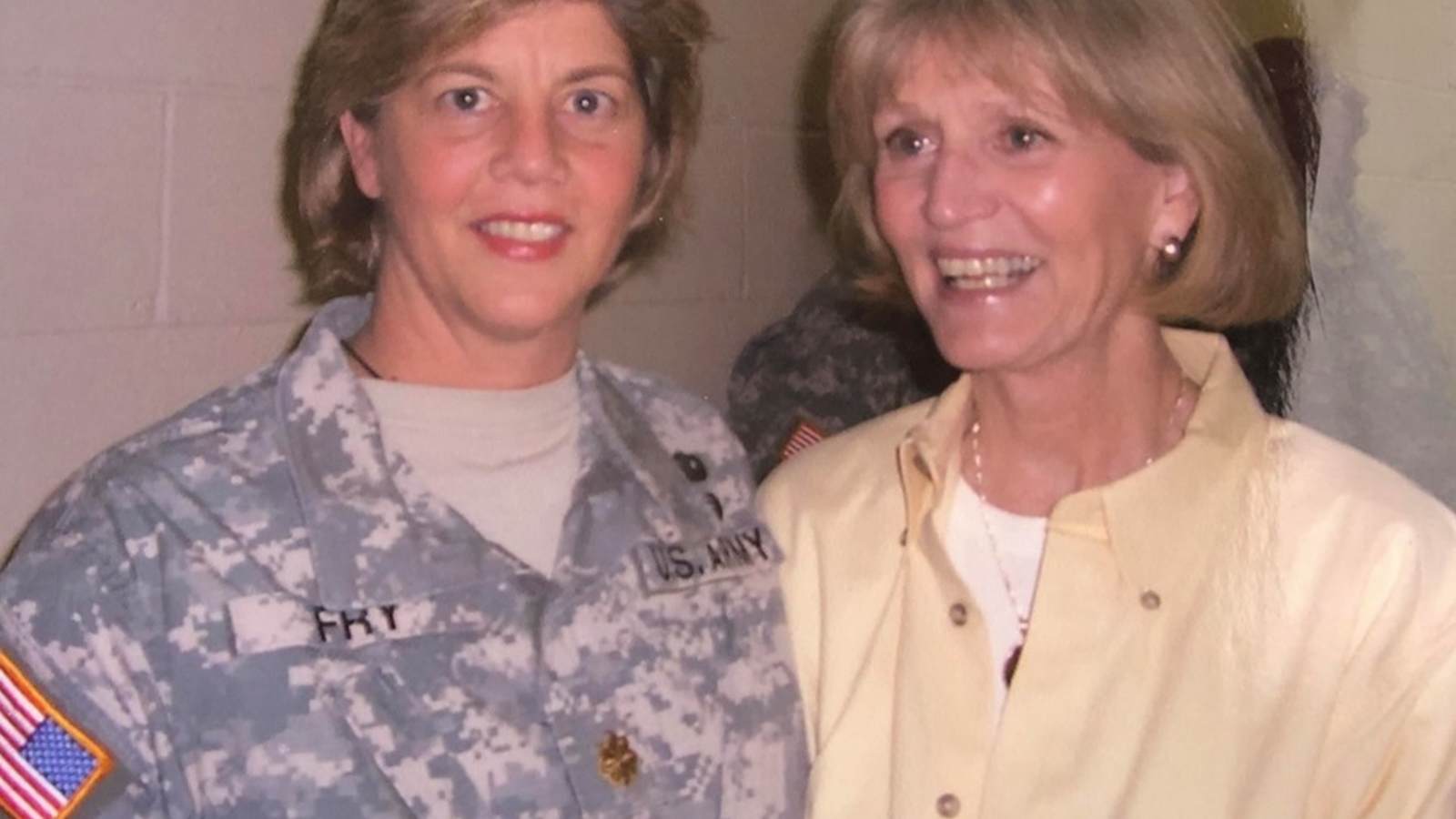 Retired Army Lt. Col. Maureen Fry, shown here as a Major, is standing with her mother Angela Fry Bull, a USO of North Carolina volunteer for over 11 years, just before her promotion to the rank Lieutenant Colonel. 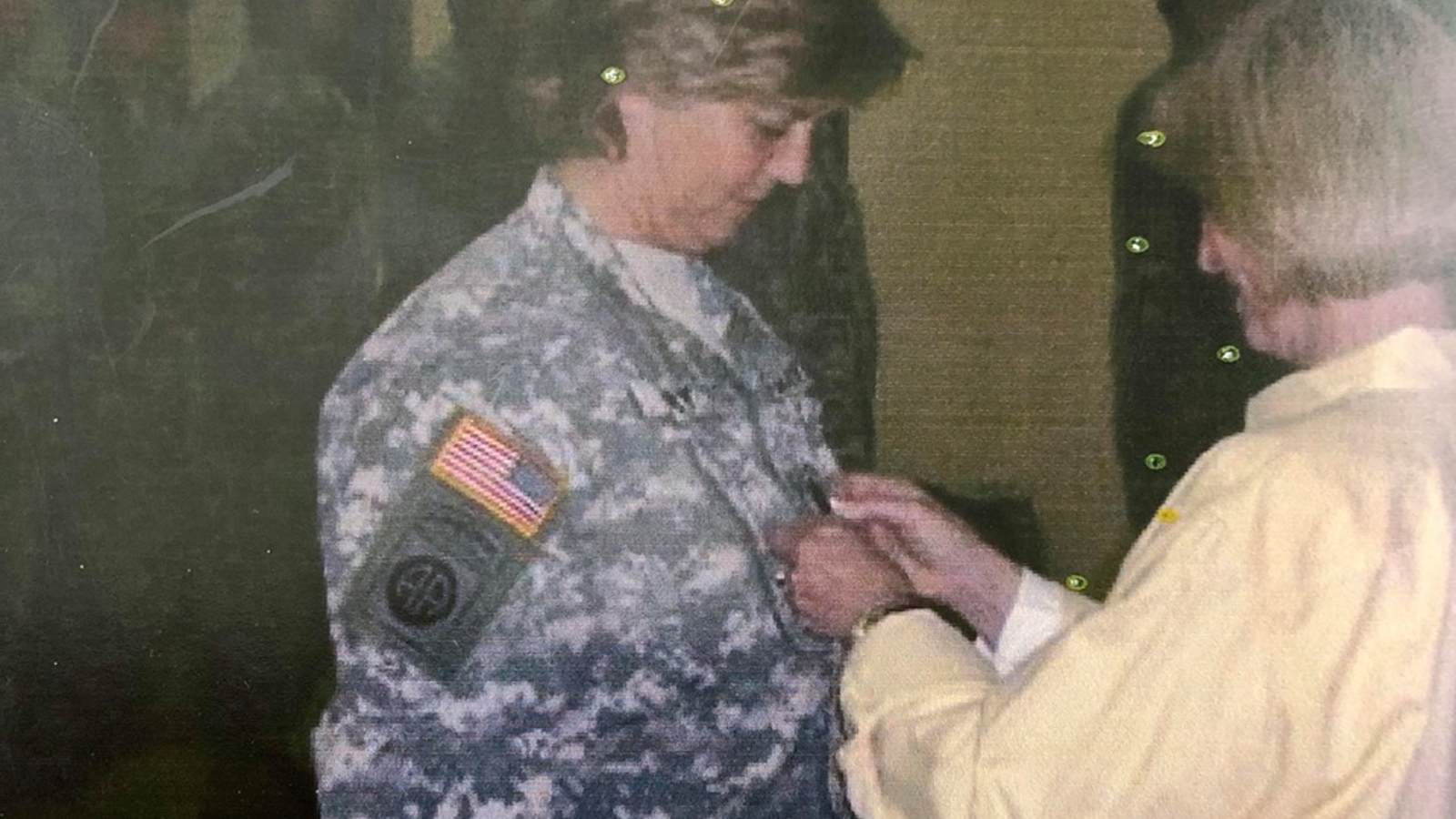 There I was standing in the pre-deployment room at Pope Air Force Base [now Pope Army Airfield], with my unit, the 321 Civil Aﬀair Brigade, awaiting the “duffel bag drag”. This is a procedure where we all put our allotted gear into the belly of the plane, in preparation for takeoff. This period of time is often the most emotional when getting ready for deployment.

Emotions and adrenaline are combined as we get ready for our mission to protect and serve our country. I was joined by my mother, family, and a few friends. Everyone stood close beside each other and we all waited for the final goodbye before my year long deployment to Afghanistan.

The time had come to finally board the aircraft and we began to say our final goodbyes. I remember a lot of tears, laughter, and words of encouragement. My family said they loved me and wished me luck during my travels, and my friends reminded me to write and keep in touch. When it came time to say goodbye to my mother, Angela Fry Bull, she leaned in and whispered, “you keep your head down, stay safe, and know that I will find a way to do my part over here for you guys.” She shed a few tears but said this with complete confidence which made me feel that everything would be okay. My response to her was brought on with a little laughter.

We are talking about the same woman who has already fed most of my Civil Aﬀairs Team, washed and dried ALL of our laundry, allowed us to pile in and sleep throughout every room in her condo during weekends oﬀ from our training at Fort Bragg and I already know there will be a package of cookies in the mail for the entire Provincial Reconstruction Team (PRT), once we arrive to our deployment destination. In my eyes she had done everything to support me through this process, but I know how deep of a passion for making a difference she has, so truly believed her when she said she wanted to do more.

My Mom lived in Cary, N.C., for over 20 years, just down the road from the Raleigh-Durham International Airport (RDU). RDU is a great, clean and eﬃcient airport by most international airport standards, but more importantly it has an exceptional United Service Organizations (USO) center housed within its main concourse. The USO of NC center at RDU opened its doors in July 2004 and my mom learned about the center in 2005. Keeping her promise to find a way to support me and the military, she up and joined as a volunteer while I was deployed to Afghanistan.

It is no surprise that she jumped in with both feet and immediately started searching for ways to help spread the word about the USO. She started to explore options that would generate revenue for the organization. At the time, she had several friends working for the Carolina-born grocery store Harris Teeter. She had the idea to collaborate with the grocery store on an initiative that would bring in funds for the RDU USO Center. After many chats with Harris Teeter’s leadership team, they agreed to authorize the fundraiser for a span of two weekends, at roughly seven stores within Wake County, N.C. That week in 2007 my mom and other USO of NC volunteers helped kick off the first of many campaigns with one of the USO’s strongest partners, Harris Teeter.

In those two weekends the initiative raised over $6,500. It was such a success that the USO of NC received authorization to do it again the following year in all 18 Wake County stores, to be held on Armed Services Day. The event was later adopted by Harris Teeter and USO to be made into a annual Point-of-Sale event, called “Support our Troops,” a campaign which allows customers to ‘round up,’ their purchase to the nearest whole dollar at checkout. The fundraiser has been held annually ever since.

Harris Teeter distributes 100 percent of the funds collected to local USO centers to help keep America’s service members connected to family, home, and country, throughout their service to the nation. The USO acts as an extended family for our nation’s military by delivering valuable programs, morale-boosting services, engaging entertainment, and a touch of home through more than 250 locations worldwide. Since 2012, Harris Teeter has helped raise over $8.6 million dollars for the USO and its mission.

Not only was my mother one of the original founders of the Harris Teeter Support Our Troops campaign, but she also volunteered two days a week at the USO of NC center at RDU for 11 years helping service members and their families passing through the airport. She was a member of the Honors Support Team, assisting families and receiving fallen heroes of all services coming into RDU, and helped with the annual WWII Honor flight for Veterans flying out to Washington D.C., to see the WWII Memorial. My mom and other USO volunteers would travel to Fort Bragg to send oﬀ or receive deploying or redeploying troops returning from their Iraq and Afghanistan deployments with food, balloons and a band (whenever they could get one), and she was part of the Tuesday Marine Program for new Marine recruits coming and going to Camp Lejeune.

Words cannot describe how much my mom’s passion for helping America’s heroes means to me and all of my fellow military brothers and sisters. The USO of NC center at RDU became my mom’s home away from home. She was, and still is very proud of her service to the USO and feels it is one of the worthiest causes that she was ever involved with. When my mom moved to Arizona to be with me, she donated everything of value to USO of NC for service members to use passing through the RDU center.

To this day, my mom continues to donate annually to her favorite charity, the USO. So clearly you can see why I consider my mom my hero!

Since 1941, the USO has been the nation’s leading organization to serve the men and women in the U.S. military, and their families, throughout their time in uniform. From the moment they join, through their assignments and deployments, and as they transition back to their communities, the USO is always by their side and its staff and volunteers treat all service members like family.