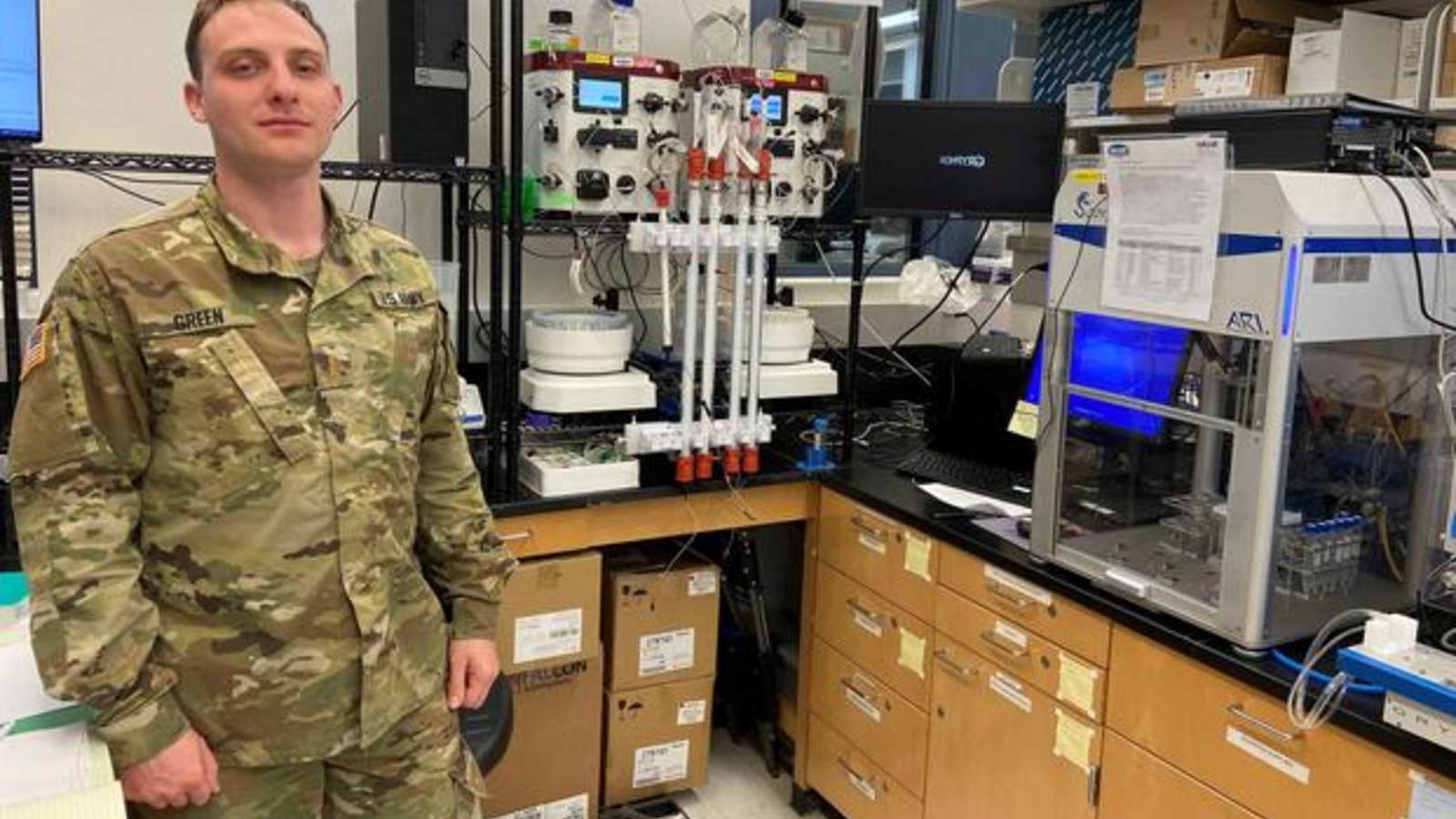 Ten months ago, Ethan Green walked across a stage at Wake Forest University in Winston-Salem, North Carolina, to accept a bachelor’s degree in biology and a commission from the U.S. Army.

On Tuesday, Green, now a second lieutenant and doctoral candidate at the Uniformed Services University of the Health Sciences, climbed out of bed at 2 a.m. for his daily trek to a lab at the Walter Reed Army Institute of Research (WRAIR) in Silver Spring, Maryland. There, he planned to spend the day harvesting proteins found in the SARS-CoV-2 coronavirus so they could be used for developing a vaccine against the disease it causes, COVID-19.

For the only active-duty member on WRAIR’s coronavirus vaccine development team, the job fulfills a dream he’s had since he was 14: to be an Army microbiologist.

“The nature of what I’m doing, it’s an amazing opportunity, and I thank God every day that I’m doing it. It makes me really sad that I have to – I’d much rather be bored out of my mind in the lab – but it has filled me with this immense purpose,” Green said in an interview March 23 with Military.com.

Researchers at WRAIR and across the globe have been working since Jan. 10 on initiatives to develop vaccines, diagnostic tests and treatments for COVID-19. That’s the date Chinese scientists first published the genetic sequence of the novel coronavirus, which gave them a map for tackling the problem.

The novel coronavirus first appeared in Wuhan, China, in mid-December and, as of March 24, had sickened more than 407,000 people worldwide and killed 18,227, according to Johns Hopkins University.

The U.S. Army, WRAIR and U.S. Army Medical Research and Development Command launched an all-out effort to develop diagnostic tests, as well as a vaccine. At WRAIR, the effort was built largely on the institute’s earlier work on vaccines for Ebola, Zika and the Middle East Respiratory Syndrome, or MERS, coronavirus.

“The Emerging Infectious Disease Branch was created by our command … a year and a half ago because we were having to quickly pull things together from different departments for Ebola and Zika and MERS. So we created this department to be already primed and ready to go,” branch director Dr. Kayvon Modjarrad said March 4.

WRAIR is developing a protein vaccine, which targets a portion of the virus – its protein shell – that includes the nubs seen in photos of the virus and several other types of protein.

Green said the idea is to isolate the proteins and then “more or less throw human antibodies at them and see what sticks.”

“What we are really looking at is a vaccine we could give to soldiers at basic training, stab them, shoot them up with the vaccine and never have to worry about it again,” he explained.

Modjarrad said the branch also is determining whether an adjuvant – a separate substance given along with the protein vaccine – will bolster immune response. Testing is currently underway in mice at WRAIR on a vaccine and adjuvants, he added.

As of March 24, the Defense Department had 321 total active cases of COVID-19, also known as the novel coronavirus, within the DoD: 174 military, 61 dependents, 59 civilians and 27 Defense Department contractors. In addition, four military members and one civilian have recovered. One contractor died March 21.

The Department of Veterans Affairs had 296 cases as of March 24, a 45% increase from the day before, and four deaths, including two in New York City.

No one knows whether the SARS-CoV-2 coronavirus will continue its path to infecting many on the planet or if it will become a seasonal illness similar to influenza. Modjarrad said the goal is to have a vaccine in place by next winter in case COVID-19 becomes a seasonal event.

“[What] the different vaccine developers, including [us], are trying to do is to position ourselves so we get through the [initial] studies and be ready for testing by the next winter season,” he said.

Several private companies are working on a COVID-19 vaccine and are in various stages of development, including Moderna Therapeutics, CureVac, GlaxoSmithKline, Inovio Pharmaceuticals, Johnson & Johnson and Sanofi.

Last week, volunteers received the first dose of a vaccine developed by Moderna Therapeutics. It also will take a year to complete the trials to determine safety and effectiveness.

Green, who had been working on a universal influenza vaccine before being pulled to assist with the coronavirus vaccine effort, is optimistic that there will be a solution.

“We’ll be able to get one before the year is out, at least the clinical trials, and that’s if everything goes wrong, like fires, earthquakes and Godzilla attacks. We’ll get something out,” he said.

*-This story originally appeared on Military.com. It has been edited for USO-NC.org. *