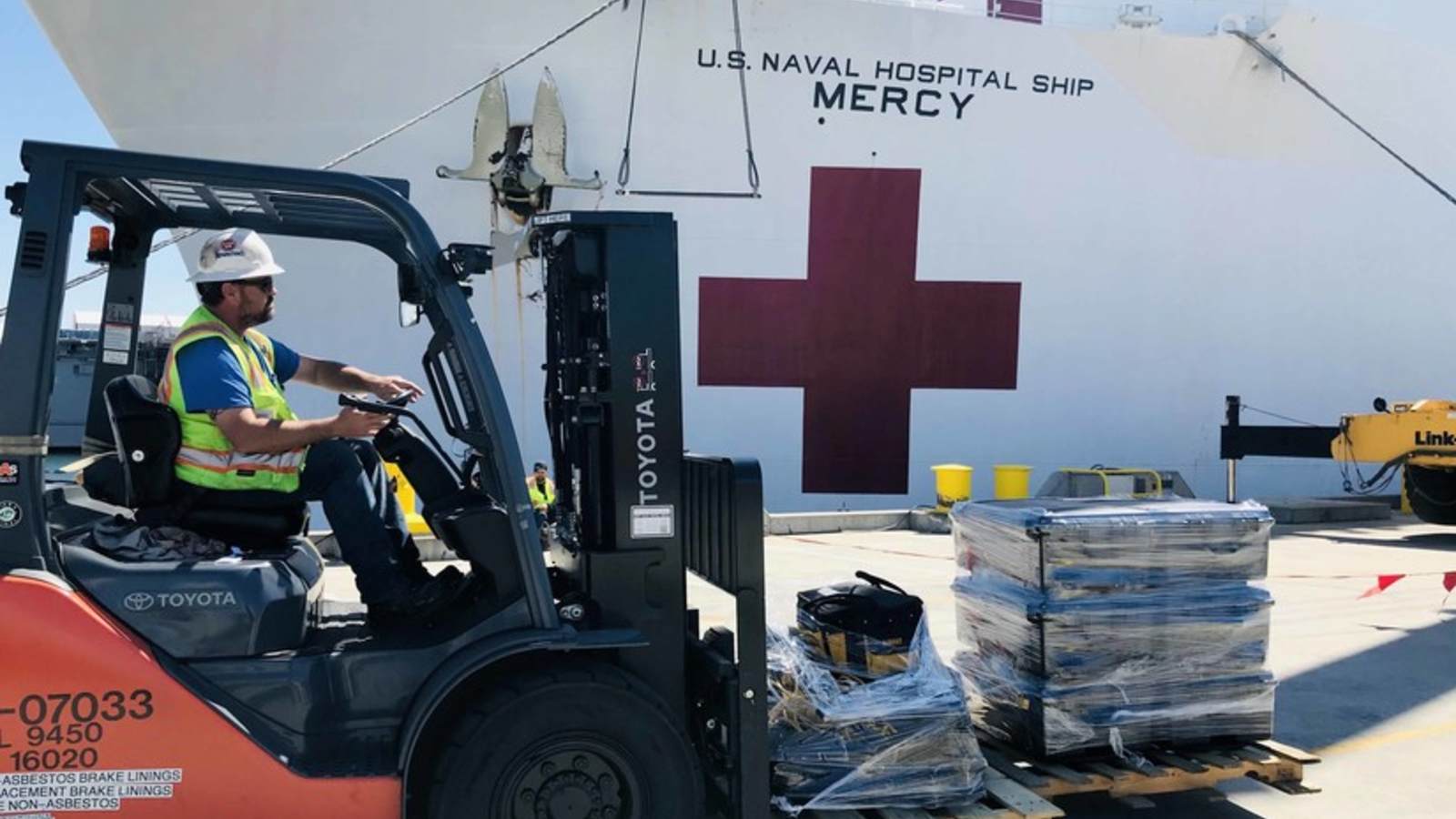 A forklift moves pallets of supplies to be loaded onto the Military Sealift Command hospital ship USNS Mercy at Naval Base San Diego, Calif., March 21, 2020. The Mercy is preparing to deploy in support of the nation’s COVID-19 response efforts. Photo By: Navy Senior Chief Petty Officer Mike Jones VIRIN: 200321-N-VU442-013C 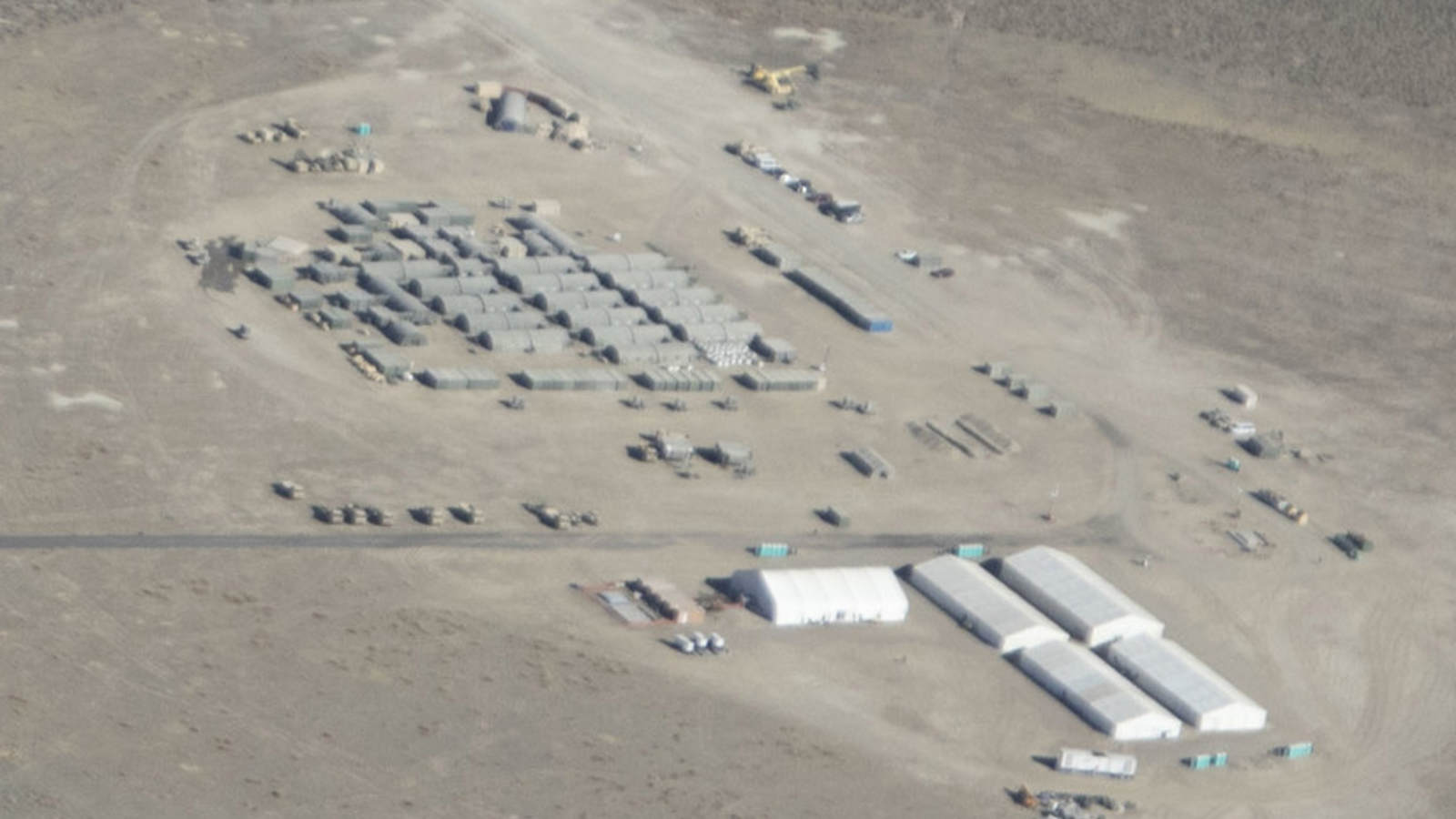 The U.S. military and the Department of Defense (DoD) are moving quickly to help combat the spread of COVID-19 across the country.

According to Defense Secretary Dr. Mark T. Esper, the Navy hospital ship USNS Mercy will go to Los Angeles to help relieve pressure on hospitals there so medical staff can focus more on COVID-19 patients.

“We’re working closely with [the Federal Emergency Management Agency] to set the conditions for the ship’s arrival later this week, so that she can start receiving non-COVID-19 medical patients to free up bed space in some of LA’s most heavily stressed hospitals,” Esper said in a March 23 news conference.

Esper also noted that in the next couple of weeks, the USNS Comfort, currently at Norfolk, Virg., will head to New York City for the same purpose. The crew and staff there, he said, are preparing for that mission.

Additionally, five military field hospitals and expeditionary medical units are on “prepare to deploy” orders, Esper said, and are expected to mobilize this week to various parts of the country. Where those units go, he added, will be based on discussions with FEMA.

“Right now, I anticipate sending a hospital to Seattle and a hospital [to] New York City,” Esper said. “Beyond that, once that’s confirmed, we will look at sending to other places and, as necessary, we will continue to alert units to prepare to deploy and then deploy them as appropriate.”

The hospital ships, military field hospitals and expeditionary medical units must all be manned by medical personnel, Esper said, and a majority of them are drawn from Reserve units. If those personnel are called to active duty to man military medical facilities, he noted, they will need to be pulled from their civilian jobs elsewhere.

“We’re very conscious as we draw people to staff up the ships or the hospitals, where we’re pulling them from,” he said. “You want to make sure that you don’t, you know, have an impact on an area that really needs it simply because you’re trying to staff up a ship or hospital.”

Esper said military medical personnel will also come from active duty units, and he added that DoD is limited in what it can provide if it is going to safeguard the ability to run its own military missions.

The secretary said he sees the military filling gaps in cities that need assistance until those cities can deal with COVID-19 on their own.

During the early stages of the pandemic, as cities ramp up capability, the DoD can come in for a few weeks to provide that capacity until the cities can convert gyms, hotels and college dorms into medical facilities, he said.

“I see us playing this role where we’re the gap-filler for a period of weeks with our capabilities, once the capacity is met through these other mechanisms,” Esper said.

The Army Corps of Engineers is also now beginning work around the country to use contracting capability to convert nonmedical facilities such as hotels, dormitories and other buildings into temporary medical facilities.

“Constructing [new] facilities, hospitals, whatnot, would take far more time than it would to take existing infrastructure and convert it,” Esper said.

-This story originally appeared on defense.gov. It has been edited for USO-NC.org.