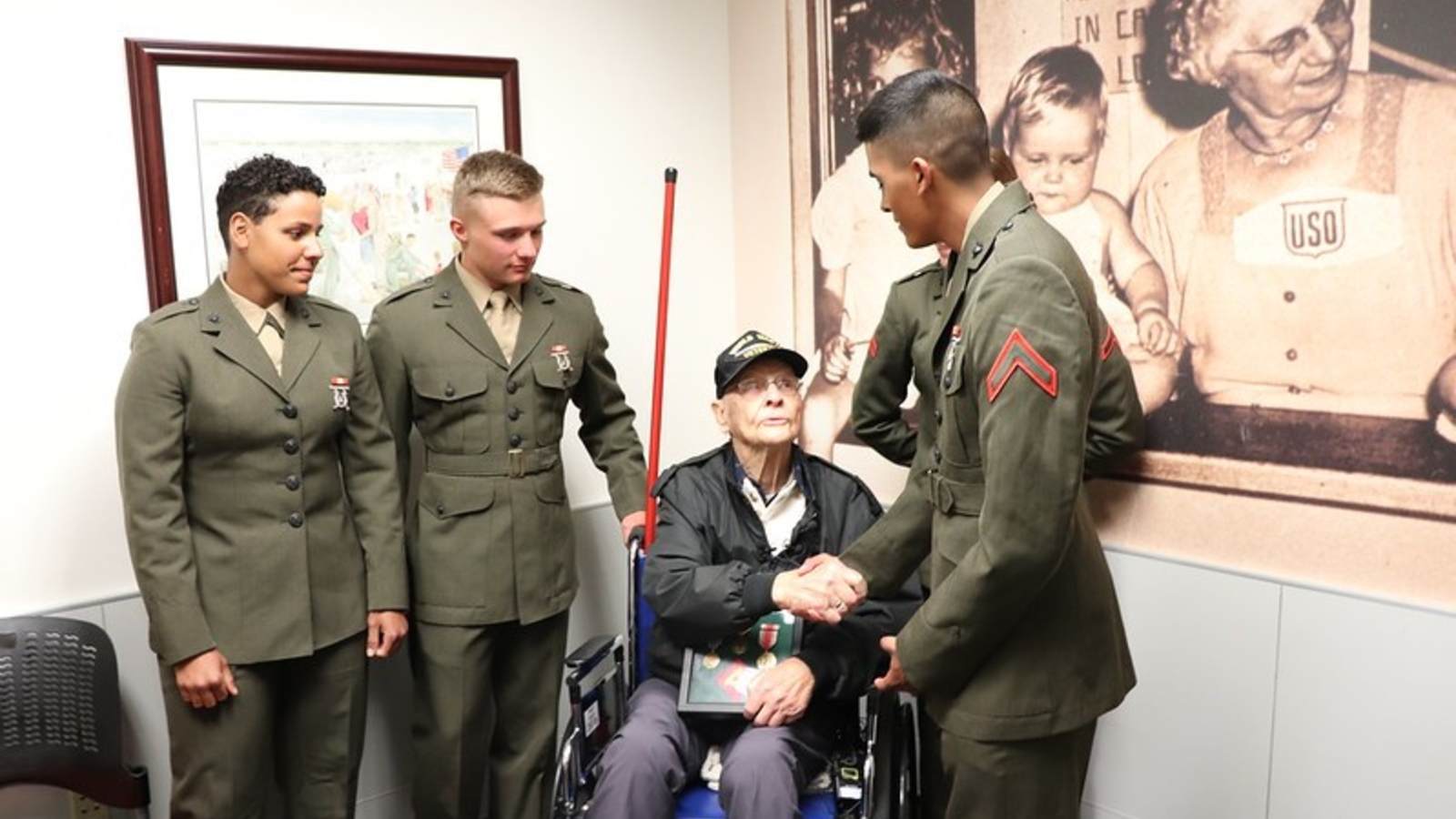 The USO of North Carolina hosted Fred Reidenbach, a U.S. Marine and Iwo Jima veteran, during his visit with junior Marines transitioning from training to their Military Occupational Specialty schools, February 19, 2020 in the USO of NC center located in the Raleigh-Durham International (RDU) Airport.

Reidenbach, who is now 97, was a 22-year-old Marine Sergeant on Iwo Jima when the 36-day battle began February 19, 1945. This visit brought together Marines, old and young, allowing them to celebrate their commitment and dedication to the Marine Corps, signifying the Marines Corps’ time-honored tradition of the passing of experience and knowledge from the old to the young of the Marine Corps.

When asked if the generation of Marines compare to the Marines of WWII and will the Marines of today be ready for the next battle, Reidenbach replied, “they are Marines, they are always ready.”

Marine Private, Trever Kincheloe, 18 of Odessa, Texas said meeting Reidenback “is a once in a lifetime opportunity,” one that Kincheloe added “I will never forget.” Kincheloe is on his way to Motor Transport Mechanic school at Camp Johnson, Jacksonville, N.C., where he will learn how to conduct maintenance on large trucks and other vehicles the Marine Corps utilizes to transport Marines and their equipment.

Marine Private First Class, Jessica Larsen, 19, from Kent, Wash., also had the rare opportunity to meet and speak with Reidenbach. “Meeting an Iwo Jima veteran is a true honor, he [Reindebach], blazed a path in Marine Corps history for junior Marines like me to follow,” said Larsen, who is also on her way to Camp Johnson to attend Personnel and Administration school.

This year marks the 75th anniversary of the Battle of Iwo Jima, a U.S. amphibious assault to capture the Japanese-held island of Iwo Jima. This 36-day battle resulted in a hard-fought American victory that caused many casualties, and this battle remains an iconic symbol of the American and Marine Corps fighting spirit.

The USO of NC is proud and honored to support our Marines during this visit, keeping them connected to family, home, county and their fellow Marines.

To learn more about the Battle of Iwo Jima and the 75th Anniversary, please visit: https://www.usmcmuseum.com/battle-of-iwo-jima.html