By By David Bedard 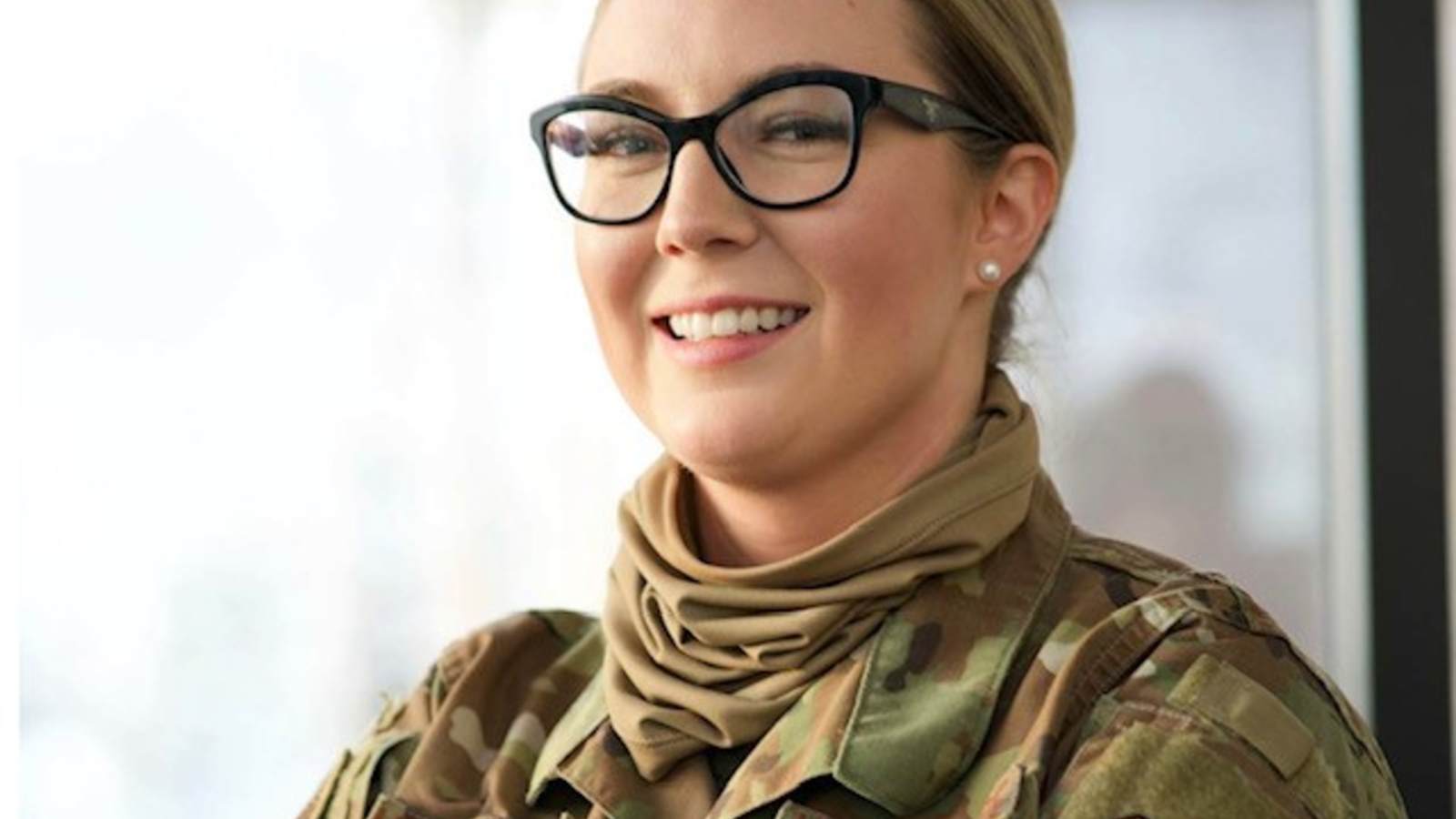 For many Americans, getting behind the wheel for a first solo drive is a rite of passage.

For Alaska Air National Guard Staff Sgt. Elizabeth McJannet-Bratton, that rite of passage didn’t come behind the wheel of a car, but behind the yoke of a Cessna 172 Skyhawk plane.

After performing a few touch-and-go maneuvers at Augusta State Airport, Maine, with her pilot instructor looking over her shoulder, he told McJannet-Bratton to pull over after taxiing. Without warning or pretense, he told her it was time to drop the training wheels and fly solo.

Dumbstruck, McJannet-Bratton said she collected herself and talked her way through the checklist of procedures. After a few minutes of defying gravity without anyone within earshot, the then 16-year-old safely touched down, successfully realizing a childhood dream of taking flight on her own terms.

Another ambition the Air Guard member recently realized was winning a statewide pageant, earning laurels as Miss Alaska Collegiate 2021 during an Oct. 24 competition in Palmer, Alaska.

McJannet-Bratton’s platform of “Combat Boots to High Heels” underscored her lifelong conviction that women can pursue careers in the military and in science, technology, engineering and mathematics (STEM), without sacrificing a sense of femininity.

“The platform is about inspiring young women with the knowledge you can be in the military or a STEM career field, and also be confident in yourself while being as girly as you want to be,” she said. “Those aren’t mutually exclusive things.”

The path to capturing the Miss Alaska Collegiate sash began in Sydney, Australia, where McJannet-Bratton was born to an Australian mother, Michelle, and an American father, David. Her parents met in Anchorage, a city she calls home.

The family moved to the United States when McJannet-Bratton was two, settling in Erie, Colorado, where she grew up. Her father David, a commercial pilot and aerospace engineer, worked on designing the Atlas V space rocket, inspiring his daughter to seek a life of wings and rocket boosters.

“I basically grew up on Star Trek,” she said.

A Girl Scout who lettered in choir and track and field, McJannet-Bratton’s aeronautic pursuits led the 16-year-old to the Civil Air Patrol and an encampment that would further cement her interest in aircraft and the military.

During a subsequent summer camp at Joint Base Elmendorf-Richardson, Alaska, McJannet-Bratton said she developed a yen for the state on the edge of the Arctic.

“I came to Alaska expecting igloos and tundra, and was like, ‘Wow, it’s gorgeous up here,” she recalled.

When** she managed to snag a $79 one-way ticket to Anchorage,** the Coloradan decided to take a leap of faith. If it didn’t work out, she could write it off as an extended vacation. But if she could find success, she thought she could make a new home.

She landed a job as a nanny and, after a month in the state, joined the Alaska Air National Guard’s 176th Wing as an air transportation specialist. A year and a half later, she landed a full-time technician job with the unit and later reclassified to traffic management.

During her transition from a tenderfoot cheechako to a veteran sourdough Alaskan, McJannet-Bratton earned a Bachelor of Science in Aviation Technology from the University of Alaska Anchorage. She is currently pursuing a Master of Science in Global Supply Chain Management.

From Combat Boots to High Heels

McJannet-Bratton attended her first pageant as a spectator in 2016.

“My impression of pageants was some women who don’t know a lot in pretty dresses walking across the stage,” she said. “After I did some research, I learned how the competitors have different platforms based on a belief of how to help the community. Most are highly educated.”

Competing in her first pageant in 2017, McJannet-Bratton failed to garner the top sash, but she got a firsthand glimpse of what is required to be competitive. Five days later, she was on a plane to Puerto Rico, recently devastated by Hurricane Maria, where she would work at an air traffic hub bringing in relief supplies.

Among those supplies was mail, which had been backed up for a month. The Airman said she was emotionally overwhelmed by a tidal wave of boxes with words of encouragement like “You got this” and “Stay Strong” scrawled on the outside.

“We worked all night getting all the cargo off, and it was all the stuff people were sending their families,” she recalled. “It was already a very humbling and impactful mission overall, but it was good to see that side of people helping each other. I am grateful to see that side of humanity.”

Living out her platform “Combat Boots to High Heels” in reverse, McJannet-Bratton continued to refine the skills to compete successfully. Through three more pageants, she learned to ace the backstage interview but would fall short in other competition areas. She was honing in on piecing all of it together for her eventual win.

Through it all was her continued service to the Civil Air Patrol as adult cadre, serving as the Alaska Wing director of cadet programs. She works with cadet staff to plan and execute large-scale activities like the annual encampment that originally inspired her to serve.

In 2016, U.S. Army Reserve Capt. Deshauna Barber was crowned Miss USA. In interviews following her achievement, she talked about her upbringing by two career soldiers and reconciling her “girly-girl side” with her military, business management and information technology interests. As an inspired McJannet-Bratton knew all along, they need not be mutually exclusive.

As far as the pageant interviews went, she said they reminded her of military boards.

The Airman said the platform she would stick with throughout her pageant career – the platform that would ultimately propel her to be crowned Miss Alaska Collegiate – arose out of a conversation she had with her sister’s friends growing up.

One friend expressed interest in being a biologist. Another replied that science was no profession for aspiring young women.

“‘I don’t want to do that, that’s for nerds, not pretty girls,’” McJannet-Bratton recalled one of the friends saying.

“No!” the Airman exclaimed. “You can do both of them. Do whatever you want and don’t let some outside perception change what you want to do.”

-This article was originally published on NationalGuard.mil. It has been edited for northcarolina.uso.org