Meet the 2020 USO East-Southeast Region Volunteer of the Year 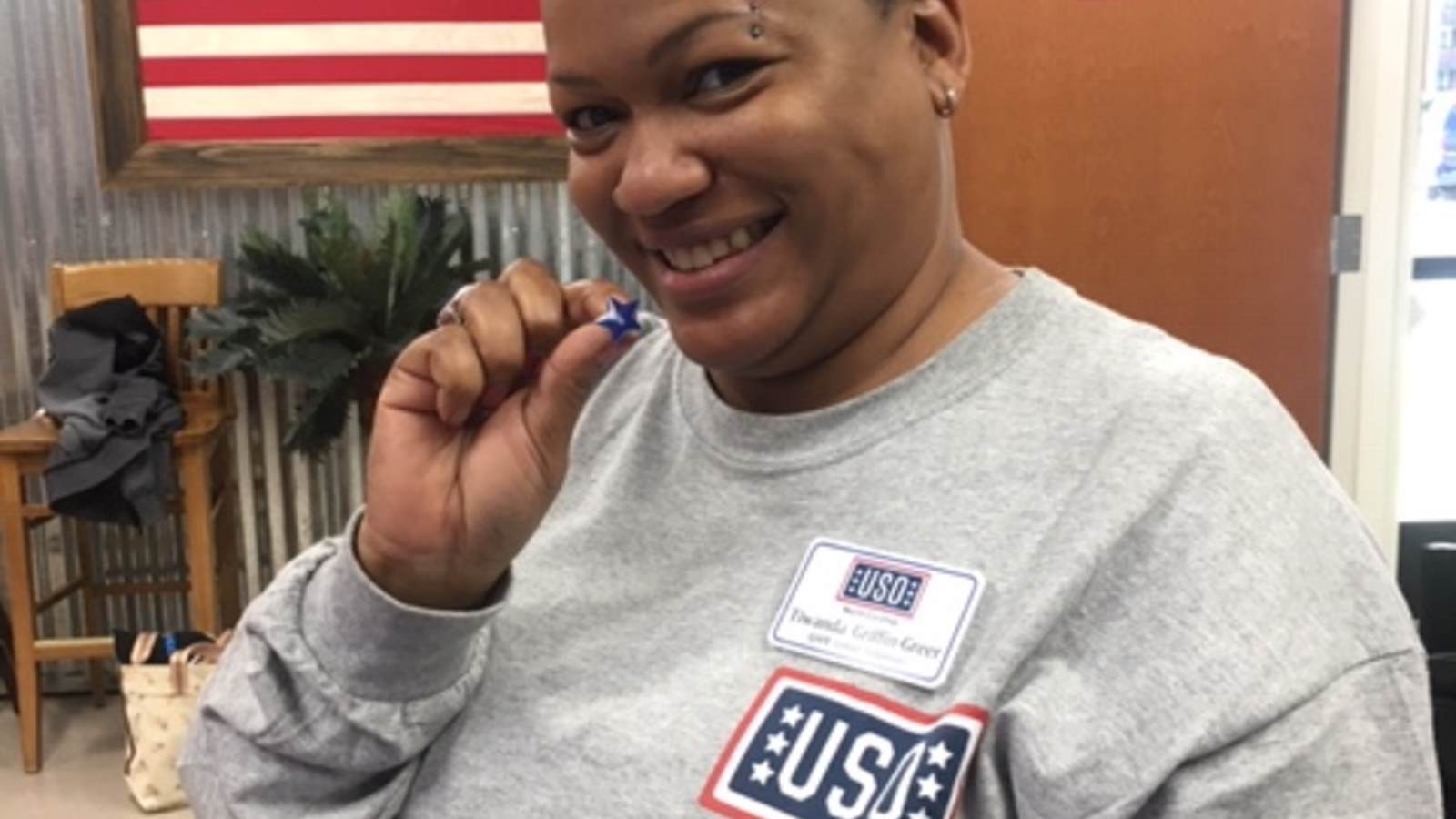 Tiwanda Griffin-Greer, a USO volunteer with USO North Carolina, Seymour Johnson Air Force Base USO Center was selected as the 2020 USO East/Southeast Volunteer of the Year. 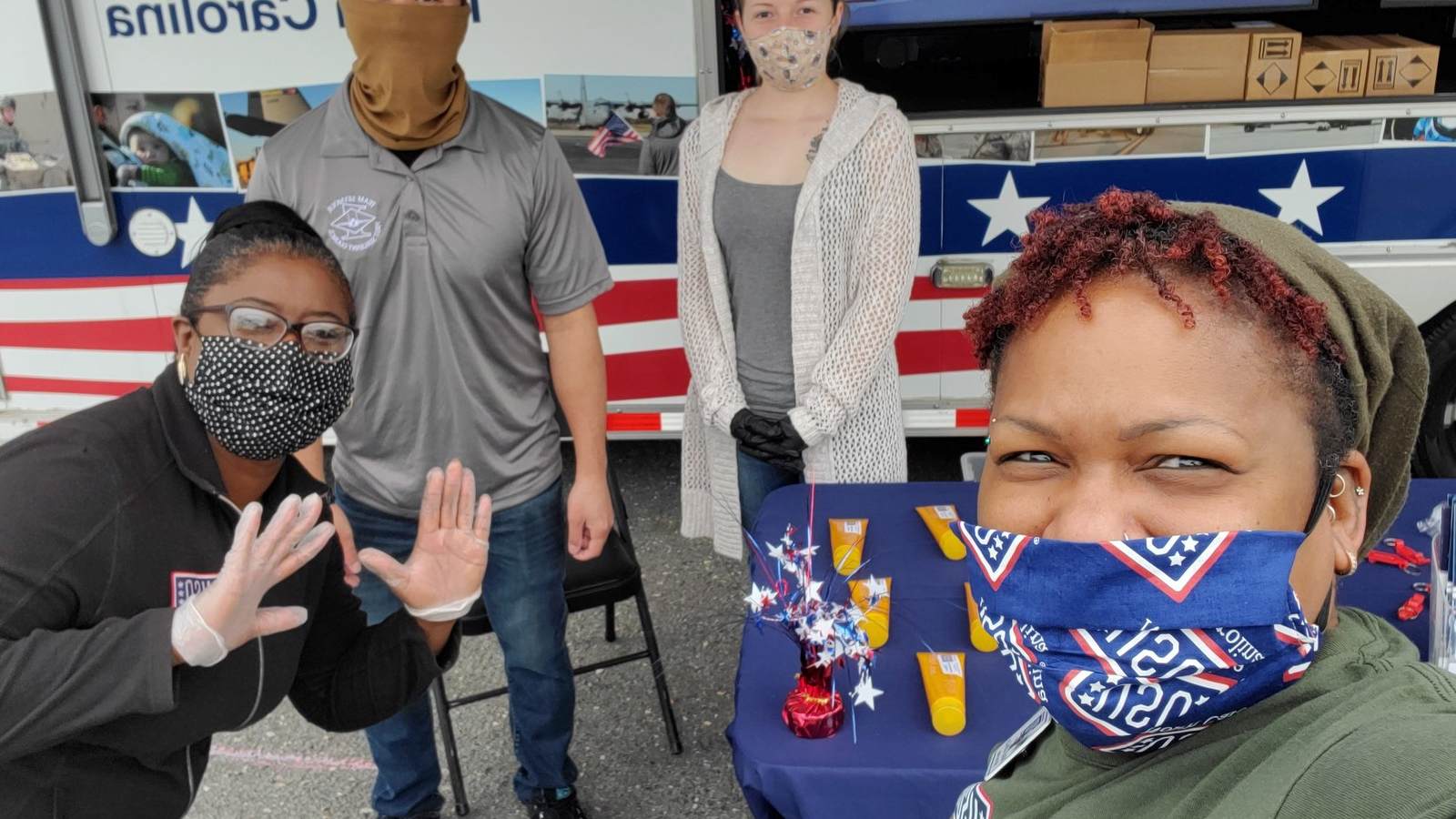 USO volunteers play a critical role in strengthening America’s military service members by keeping them connected to family, home and country throughout their service to the nation.

In the U.S. Southeast region close to 6,000 volunteers donated more than 116,000 hours of their time to our service members and their families in 2020.

One of those volunteers was Tiwanda Griffin-Greer who donated 1,299 hours of her time!

Griffin-Greer, is a volunteer at the USO center on Seymour Johnson Air Force Base in North Carolina. She was selected as the 2020 USO East/Southeast Volunteer of the Year. Those nominated for this noteworthy recognition included volunteers from USO Metropolitan New York, USO Metropolitan Washington and Baltimore at Quantico and Fort Belvoir, as well as one other volunteer from the USO Southeast Region.

Griffin-Greer began volunteering at USO Seymour Johnson before the center even opened in November 2019. She’s been a tireless recruiter of other volunteers and a motivator to everyone.

“Tiwanda is a servant leader. One of our very first volunteers, she helped establish and start up our center at Seymour Johnson Air Force Base, which opened Nov. 21, 2019. In preparation for our grand opening, Tiwanda helped set up the facility and decorated, recruited active duty volunteers, and is our center volunteer coordinator,” said Williams.

A retired Air Force First Sergeant and survivor of the shooting at Lackland Air Force Base in 2016, Griffin-Greer’s resiliency inspires others. She actively mentors many volunteers and service members. She offers career guidance and other resources for schools, cross training, financial literacy and more.

“She is very organized and self-motivated and loves to mentor others, enabling them to be their best, in and out of uniform. We are honored and grateful to have her as a valuable member of our Seymour Johnson Air Force Base USO Center team,” added Williams.

As she lifts the spirits of our service members and their families, Tiwanda is also lifting her own. Tiwanda said volunteering at the USO gives her great joy and purpose.

Most volunteers at USO Seymour Johnson are active duty military who just finished a long day at work. Tiwanda keeps their morale high and the volunteers inspired. She oversees the day-to-day operations and ensures the USO center is kept clean and is well maintained.

When asked what it means to be selected as the USO East/Southeast volunteer of the year, Griffin-Greer responded.

“It means the world to me. I volunteer as a way to give back of myself, but to also be recognized for my service is an added bonus and it means that not only do the recipients of our service appreciate and recognize the time, care and commitment of what we do and how we care for them, but it goes beyond the walls of Seymour Johnson and I couldn’t be more ecstatic,” said Griffin-Greer.

Sarah Kemp contributed to this report