It’s Not ‘Just a Video Game’: For Many of Today’s Military, It's Their Connection Home

By Danielle DeSimone and Sydney Johnson 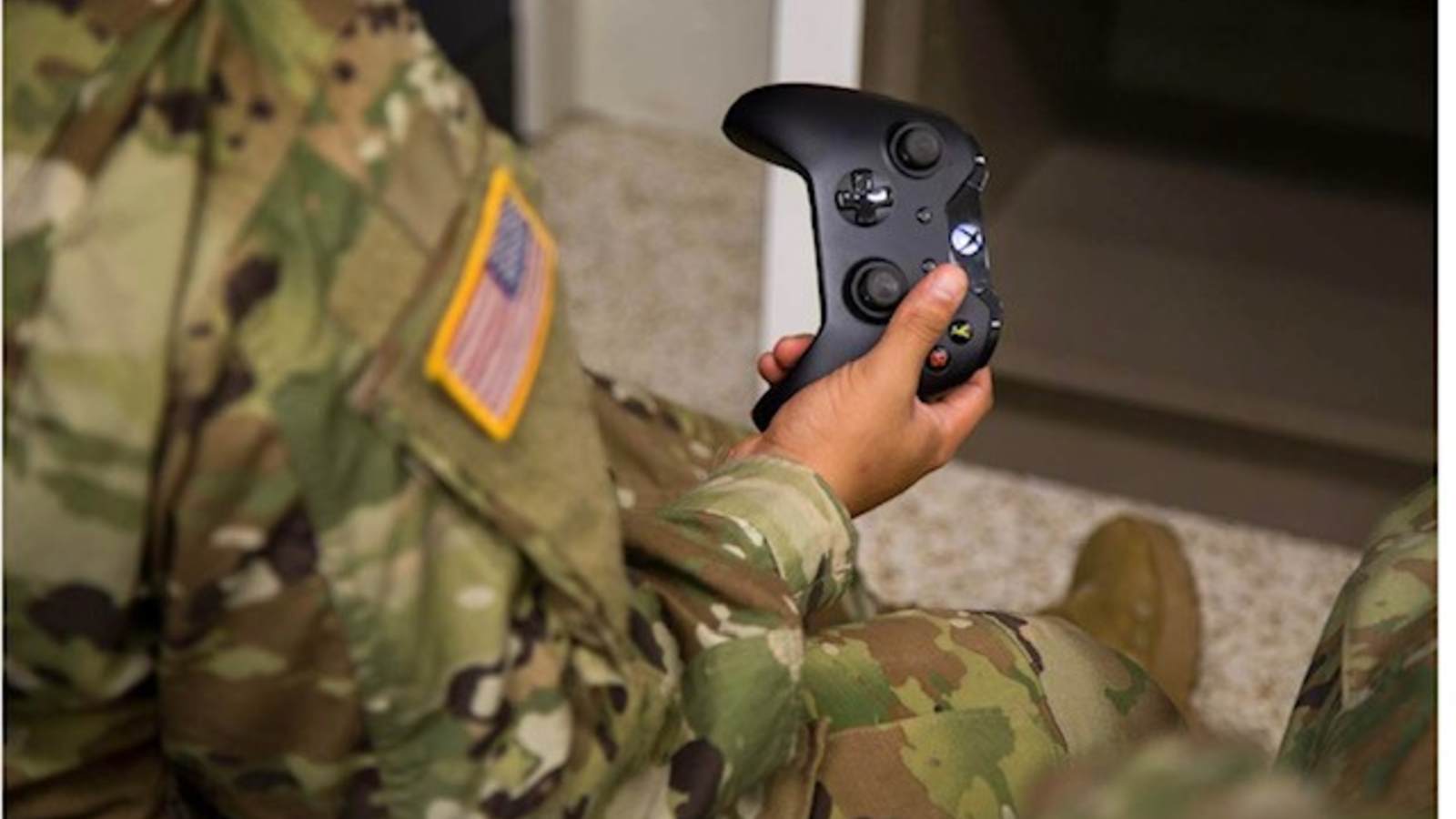 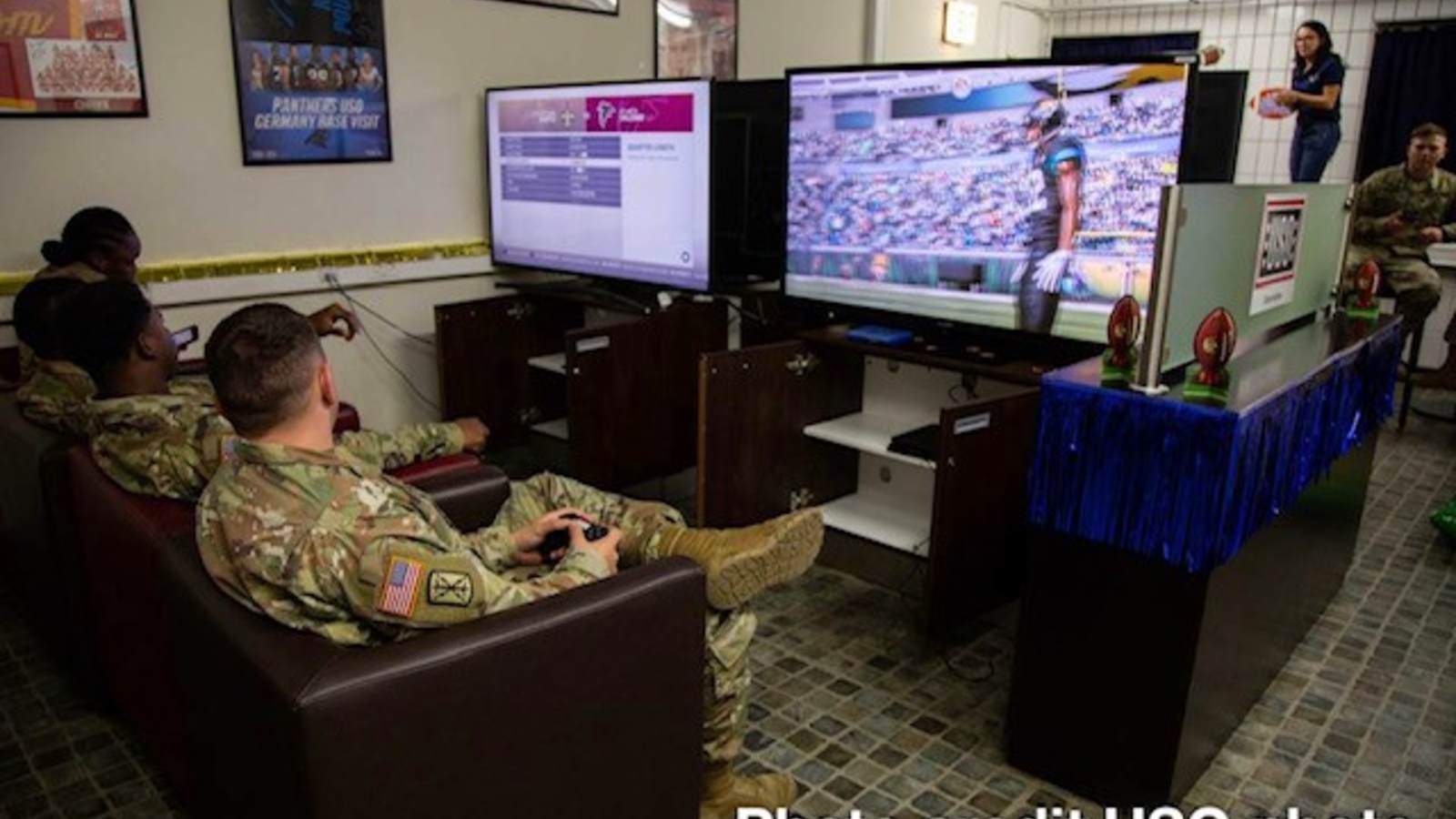 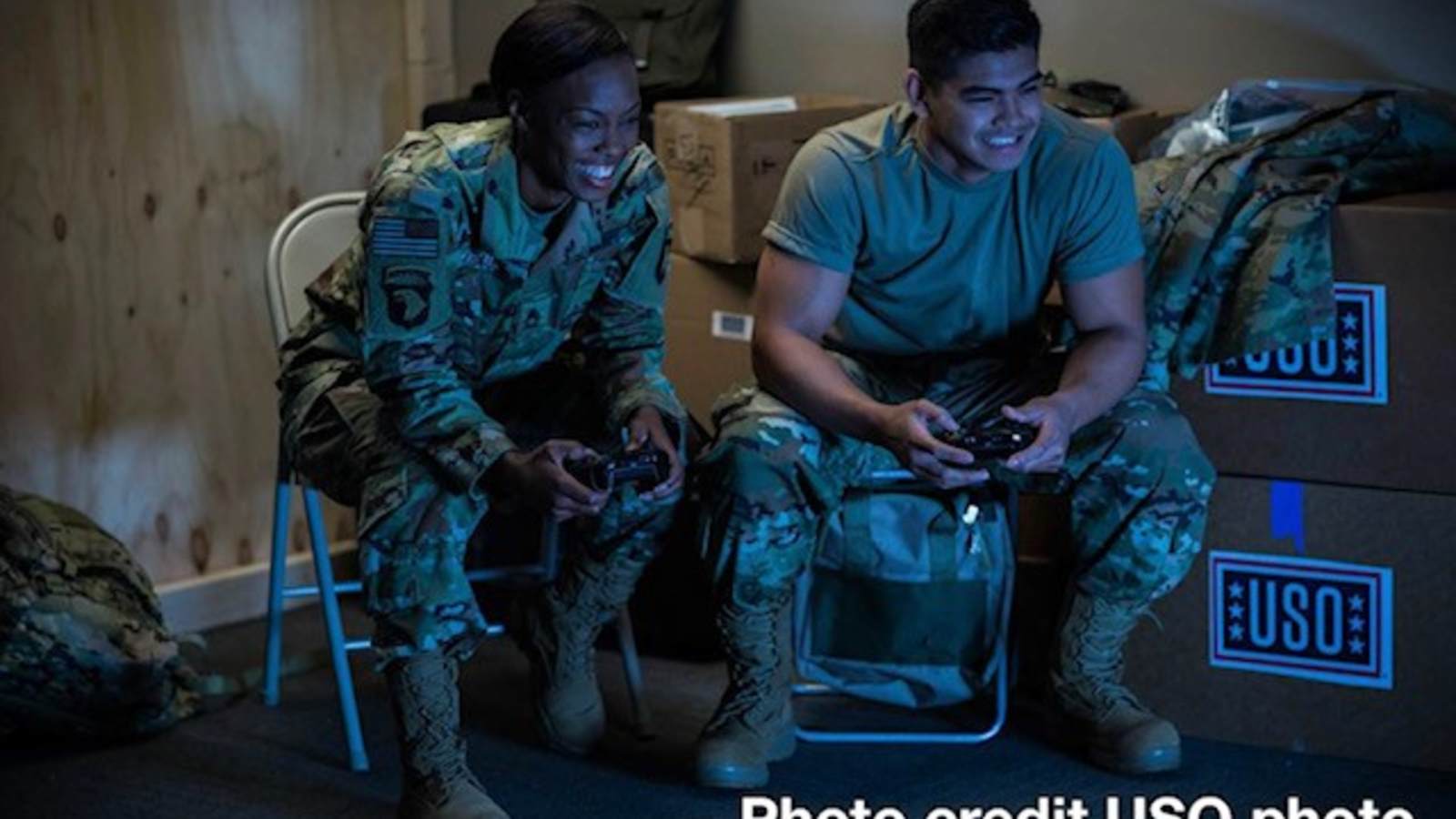 When Raymond Whitaker returned from deployment several years ago, he admits that he had a difficult time adjusting to life back home with his wife and son.

“The first deployment I came home was really hard for me to reconnect with my family. And it was just … I changed a lot,” said Whitaker. “Coming back, it was like it was a brand-new relationship with both my son and obviously, my wife.”

Feeling disconnected from his family, Whitaker noticed that his son had developed a passion for video gaming, so he decided to join him and play games together.

“I started playing the game with him and we started having conversations that honestly I would not have had with him if it wasn’t for gaming,” said Whitaker. “It just immediately tore down any of the weirdness of being gone for long periods of time and trying to get used to each other again. Gaming was the commonality that we both shared and then those conversations made it easy.”

When you think of an uplifting, family-bonding activity that can span across thousands of miles and boost morale among U.S. service members, your first thought might not be video games. However, for today’s service members, video games are doing just that – keeping them connected to home and their loved ones, while also helping them strengthen friendships among their fellow service members during otherwise lonely deployments and assignments.

With 50% of service members citing time spent away from family as their number one issue in military life, it is heartening to see that video games can have a very real, positive impact on the lives of today’s service members by reconnecting them with their loved ones, as well as with the greater military community.

It’s stories like Whitaker’s that demonstrate the importance of why the USO, to help ease the strain of distance and isolation, has plugged in its gaming consoles and built a community of service members and enthusiastic gamers.

Video Games Help Service Members Fight Stress and Isolation by Leveling the Playing Field Prolonged distance from loved ones – whether it be due to a deployment or being stationed far from home – is part of daily military life, but it can take its toll on service members’ morale.

According to the Blue Star Families’ 2019 Military Family Lifestyle Survey, isolation from friends and family was listed as one of the top three stressors within the military community. With 39% of military families separated from their service member for 6 months or more in the past 18 months, this stress is a constant one in the military community. The mental and emotional strain of military life is why there are USO locations all around the world to support the U.S. military – and precisely why many of them offer a variety of ways to connect with loved ones, including through video gaming.

Aside from its immense popularity and evolution into a billion-dollar global industry, video games have also been proven to have a positive effect on current service members or veterans who are struggling with the realities of military life. About half of military and veteran video gamers specifically play video games in order to deal with military-related stress. Studies show that gaming can help veterans cope with combat-induced trauma, as well as to alleviate said stress and, significantly, to help them socialize and bond with others.

USO Gaming Community Manager and veteran Ian Wright explained that after growing up playing video games, he continued to play when he joined the Army. That’s when, for him, gaming turned into far more than a hobby and became an important way to socialize and make friends with his fellow soldiers. From the barracks at basic training to the tents on deployment, Wright and other service members utilized their love of video games to stay entertained and build comradery while serving.

“It’s just been one of those ways that I’ve made friends and I’ve stayed connected. I still talk to Army buddies through Xbox,” Wright said. “It’s a new way of socializing [for our military] … It’s a way to connect … especially in this COVID environment that we live in now.”

Video game centers at USO locations are outfitted with multiple screens and consoles, designed specifically so that groups of service members can play together. This is significant, as studies show that playing video games on teams and with others – like service members do at USO-hosted video game centers and at tournaments – can improve teamwork in daily life. Many of these games require players to form collaborative relationships with other gamers and offer support – either within the game itself, or in conversations while playing, in which service members can discuss the challenges of their lives beyond the screen. This provides troops with even more opportunities to bond with their fellow service members and build a community of gamers.

“It’s such a huge touching point with folks to be able to connect … There’s teamwork, it’s pro-social, there’s communication – all of these things that the military trained us to do well,” Whitaker said. “And it puts you into situations where you can have a good time with those around you in a safe environment. You’re breaking down barriers and walls of things that you probably wouldn’t have learned about somebody, but you learn about them through gaming.”

This focus on teamwork across all barriers is also seen in video game tournaments, such as the ones hosted by the USO, which provide an online opportunity for service members to engage with their community outside the written and unwritten rules of the military world. In this online space, there is a sense of anonymity that allows service members of all ranks to step away from the chain of command, be on equal footing and compete against and alongside their peers, superior officers, commanders, veterans and civilians.

This sense of equality, especially after a long, hard day or a difficult deployment can help boost morale and foster a sense of resiliency among lower-ranking service members.

“No one cares what rank you are … it doesn’t matter what your job is,” Wright said. “If you’re really good at that game for that moment, that’s all that matters. You are the best at it. It gives our service members the opportunity to be the absolute best at what they do [outside of their jobs].”

How the USO Supports Service Members Through Video Games While offering video gaming as means of entertainment is not new to the USO’s offerings, its latest online and social approach is a refreshed take on a now-classic USO amenity. In the last year, the organization has taken its gaming initiative to the next level by outfitting more of its locations with dedicated gaming spaces and hosting video game tournaments, both in person and online.

While each USO center has at least one video game console, several have entire rooms and spaces dedicated to gaming, such as USO Dubai, USO Ft. Hood, USO Camp Buehring and USO of North Carolina Seymour Johnson Air Force Base. There are many service members who are unable to afford their own video game systems; these USO gaming spaces supply them with the proper gaming technology and offer them a place to nurture their hobby, connect with others and engage in some friendly competition.

“The difference of what the gaming centers provide is the right type of gaming equipment to promote the idea of teamwork, prosocial behavior, communication – all of those things the military already does,” Whitaker said.

“They can come play Mario Kart and these other games and they have the ability to compete against each other and to create the rivalry. It’s no different than everything that we do in the military. Alpha Company is battling Bravo, Charlie and Delta Company. It’s a competition. I mean, we thrive on competition in the military, but this is the right type of competition that it’s providing.”

The USO staff within these centers have also started organizing local gaming tournaments and competitions, often tapping into their own experiences of service and video gaming to build online community-building events, which are open to USO guests and local civilians, retirees and veterans. As Wright notes, referencing his own military service, video games and gaming tournaments can help service members, or anyone, mentally escape during stressful times or when they feel a little bored or lonely.

“We want to get our military service members up [and in a good headspace],” Wright said. “Especially right now with COVID [it’s important that we give them opportunities to get] … out of the barracks mentally.”

“We’re trying to use this opportunity to bridge that civilian-military divide,” Wright said. “It’s more of a focused and driven effort to get our service members interacting with each other and interacting with members of the public and our veterans, as opposed to just putting them in a corner with a copy of Call of Duty and saying, ‘Go have fun for a couple hours.’”

For one soldier, these competitions have been helped him connect with the larger community in a way he would not have without this initiative.

“[The tournaments] bring people together from around North Carolina [or wherever they are hosted], whether they’re active duty, vets, or family members,” he said. “Everyone seems to just want to have fun, meet new people and explore different games together.”

Video games are so much more than a screen, a game console and the act of putting on a headset for a few hours of fun. For many service members, the escapism of video games can allow them to forget – just for a moment – the stress and responsibility of their work.

They provide service members with a moment of normalcy and a brief respite from the pressure of their service to this nation – and through the USO, they can do just that.

This article was originally published on USO.org. It has been edited for northcarolina.uso.org