Military Appreciation Month, a Time to Reflect and Give Thanks 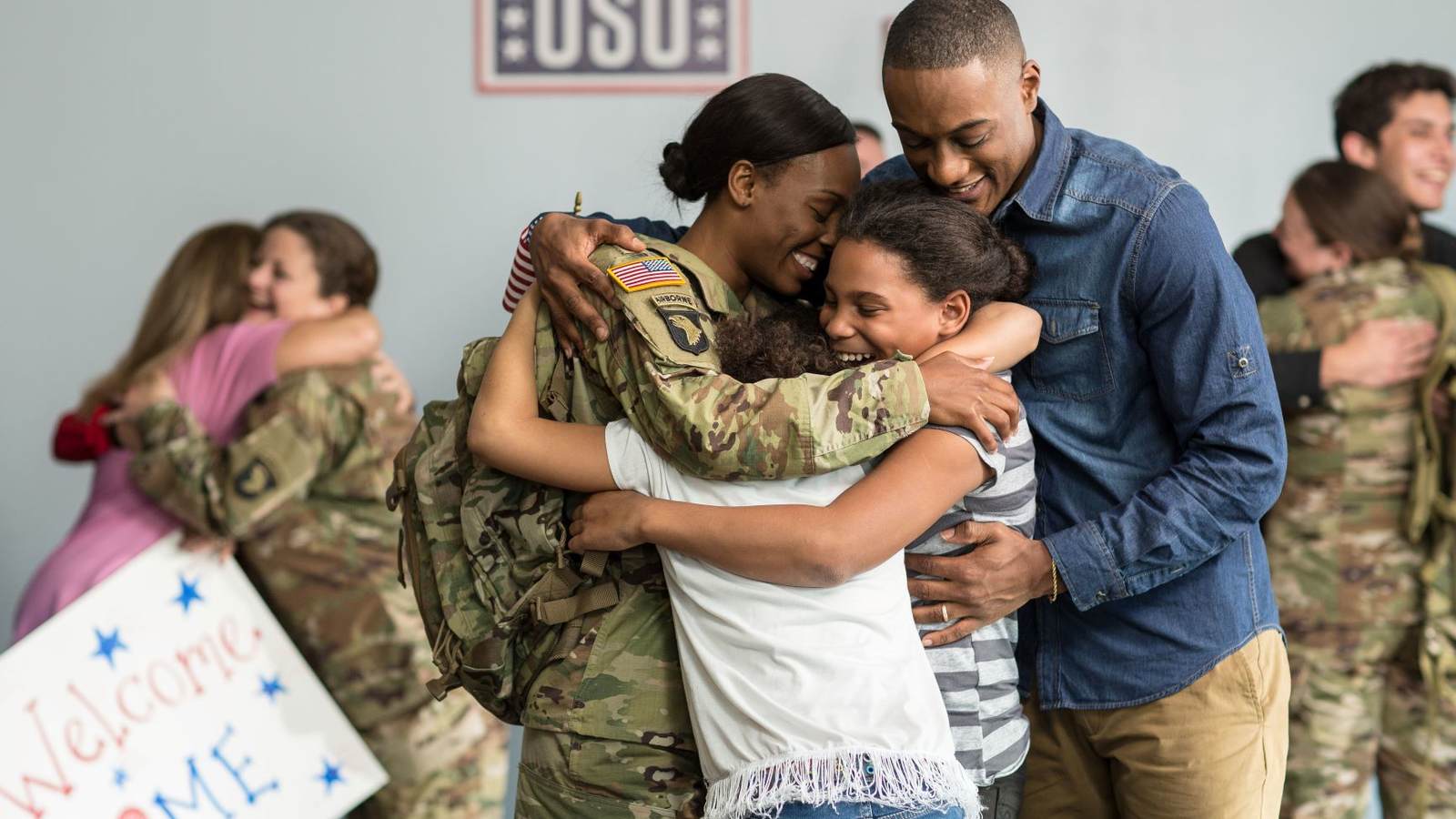 365 days a year, 7 days a week and 24 hours a day, members of the U.S. military are on call around the world, defending the interests and security of the nation. This May, during Military Appreciation Month, is the perfect opportunity express gratitude to them, and their families, for all that they do every day.

This year, as thousands of service members work on the front lines of the COVID-19 pandemic, it is especially important that we as a nonprofit military organization – and you, as a patriotic citizen – pause to honor them during Military Appreciation Month.

When is Military Appreciation Month?

Officially designated by Congress in 1999, Military Appreciation Month takes place every year throughout the entire month of May. Every year, the president issues an annual proclamation reminding Americans to celebrate this patriotic month that pays tribute to those who have sacrificed so much for our freedom.

Although the entire month is designated to honoring past and present military members and their families, there are several, specific military holidays sprinkled throughout Military Appreciation Month itself, including Loyalty Day, VE Day, Military Spouse Appreciation Day, Mother’s Day, Armed Forces Day and Memorial Day.

One of the lesser-known Military Appreciation Month holidays is Loyalty Day, which is celebrated on May 1. Officially designated by Congress as “a special day for the reaffirmation of loyalty to the United States and for the recognition of the heritage of American freedom,” Loyalty Day has been marked by every U.S. president since 1958 with an official proclamation.

Fun fact: The first Loyalty Day, then called “Americanization Day,” was celebrated in 1921, but was renamed “Loyalty Day” by President Eisenhower in 1955.

While most people have already heard about the post-Thanksgiving holiday, Giving Tuesday, this year, in light of the COVID-19 pandemic, there will be a day designated as Giving Tuesday Now on May 5. In response to the pandemic, the country is once again coming together to give back to their communities – especially those affected by the virus and those on the front lines fighting the disease. According to the Giving Tuesday nonprofit’s website:

“#GivingTuesdayNow is a new global day of giving and unity that will take place on May 5, 2020 – in addition to the regularly scheduled Dec 1, 2020 #GivingTuesday – as an emergency response to the unprecedented need caused by COVID-19.”

As the COVID-19 outbreak is quickly evolving, the USO of NC has pivoted resources across our entire global operations to help care for military members and their families, many of whom are on the front lines of fighting the disease. Your support, particularly on Giving Tuesday Now on May 5, ensures that our nonprofit military organization can continue the incredibly important work of supporting our nation’s service members and military families.

Marking the end of a long, deadly war, VE Day, short for “Victory in Europe Day,” celebrated just that: the end of World War II on the European front. Since this momentous occasion in 1945, much of the world has continued to celebrate VE Day on May 8 every year. It has since become an official holiday in Military Appreciation Month.

“This is a solemn but a glorious hour,” President Truman said in his 1945 address to the nation. “The flags of freedom fly over all Europe … [but] our rejoicing is sobered and subdued by a supreme consciousness of the terrible price we have paid to rid the world of Hitler and his evil band.”

This year marks the 50th anniversary of VE Day and special celebrations – many of which will now be held virtually or are postponed until the fall due to the COVID-19 pandemic – are planned around the world. In honor of the 50th anniversary of VE Day, the USO is collecting WWII memories and photos from military family members. Do you or a family member have a story from the war that you would like to share with us? You can click here to read more about sharing your WWII memory.

Military Spouse Appreciation Day: May 8, 2020 (The Friday Before Mother’s Day)

Military Spouse Appreciation Day takes place on the Friday before Mother’s Day and honors the military spouses who sacrifice so much in support of their service member’s mission. President Ronald Regan first proclaimed “Military Spouse Day” a holiday in 1984 before Congress declared it part of Military Appreciation Month in 1999:

“Throughout the years, as the numbers of our married men and women in uniform have grown and as their military missions have become more complex and dispersed, their spouses have made countless personal sacrifices to support the Armed Forces,” President Regan noted in his 1984 proclamation. “In many instances, they subordinated their personal and professional aspirations to the greater benefit of the service family.”

Military spouses play a huge role in not only taking care of things while their loved ones are deployed, but also in providing a backbone of support and care during the tough times. The USO has supported military spouses for many years and in 2016, our organization launched a worldwide initiative focusing on “Milspouses” through programs such as USO Military Spouse Networking and USO Coffee Connections. These programs have strengthened and empowered military spouses by connecting them to their social, professional and community networks.

Fittingly close to Military Spouse Appreciation Day, Mother’s Day takes place every year in the U.S. on the second Sunday of May. Mother’s Day was created in 1908 by Anna Jarvis and officially became a holiday, as declared by President Woodrow Wilson, in 1914.

Today, children across the country observe this holiday by showing gratitude to the mother figures in their lives, often by sending cards, flowers or other tokens of appreciation to these special women.

In particular, military mothers – whether they’re a deployed service member, supporting their child who is currently serving, or holding down the fort while their spouse is on the front lines – especially deserve to be acknowledged and remembered on Mother’s Day for the sacrifices they make every day.

Armed Forces Day is celebrated on the third Saturday in May, and it is the day Americans celebrate their military forces. In 2020, it falls on Saturday, May 16.

Unlike Veterans Day (previously observed as Armistice Day-the end of World War I), which honors those who wore the cloth of our nation at war, and unlike Memorial Day, which honors those who died wearing the cloth of our nation at war, Armed Forces Day is the proper day to honor both the men and women currently serving, as well as those who have previously served and sacrificed to defend our freedom.

Armed Forces Day was created on August 31, 1949, by then-Secretary of Defense, Louis Johnson, to replace separate Army, Navy and Air Force Days. The event stemmed from the Armed Forces’ unification under one Department of Defense by then-President Harry S. Truman when he signed the National Security Act into law on July 26, 1947.

Memorial Day, which is celebrated on the last Monday in May, honors service members who have died in military service to the nation. The holiday has roots dating back to the post-Civil War era, when citizens would informally create spring flower memorials on the graves of fallen soldiers.

In modern history, the holiday is also often cited as the unofficial start to the summer and many families choose to pay tribute to fallen service members by visiting veterans’ cemeteries or memorials, like the Vietnam or World War II Memorials in Washington, D.C. However, due to the COVID-19 pandemic, many will be choosing to mark this military holiday from the safety of their home this year. The USO encourages all to #HonorFromHome and post photos or messages of thanks on social media for the sacrifices of service members and their families on Memorial Day weekend 2020.