USO of NC Strengthens the Force through valued partnerships and programs 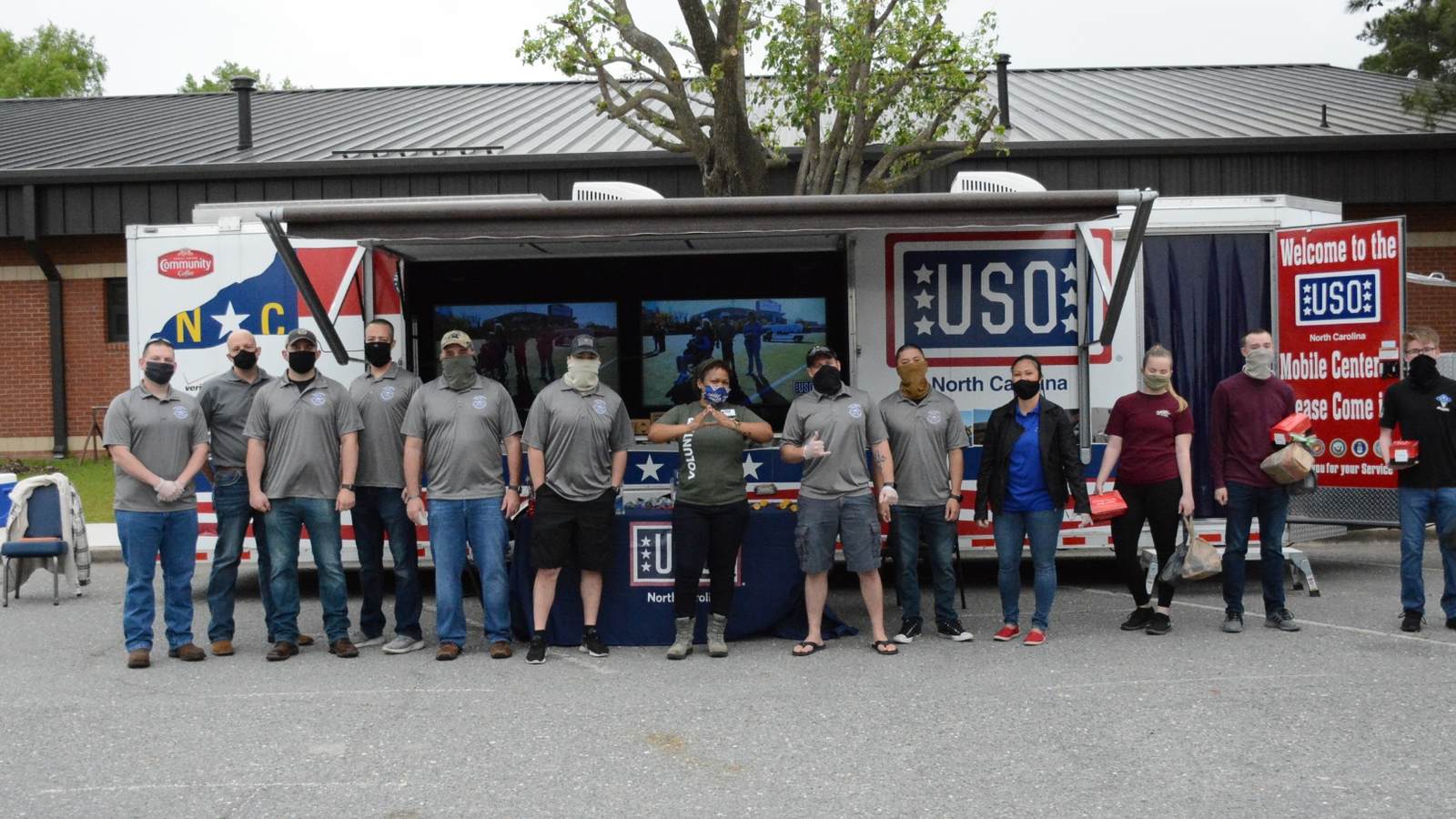 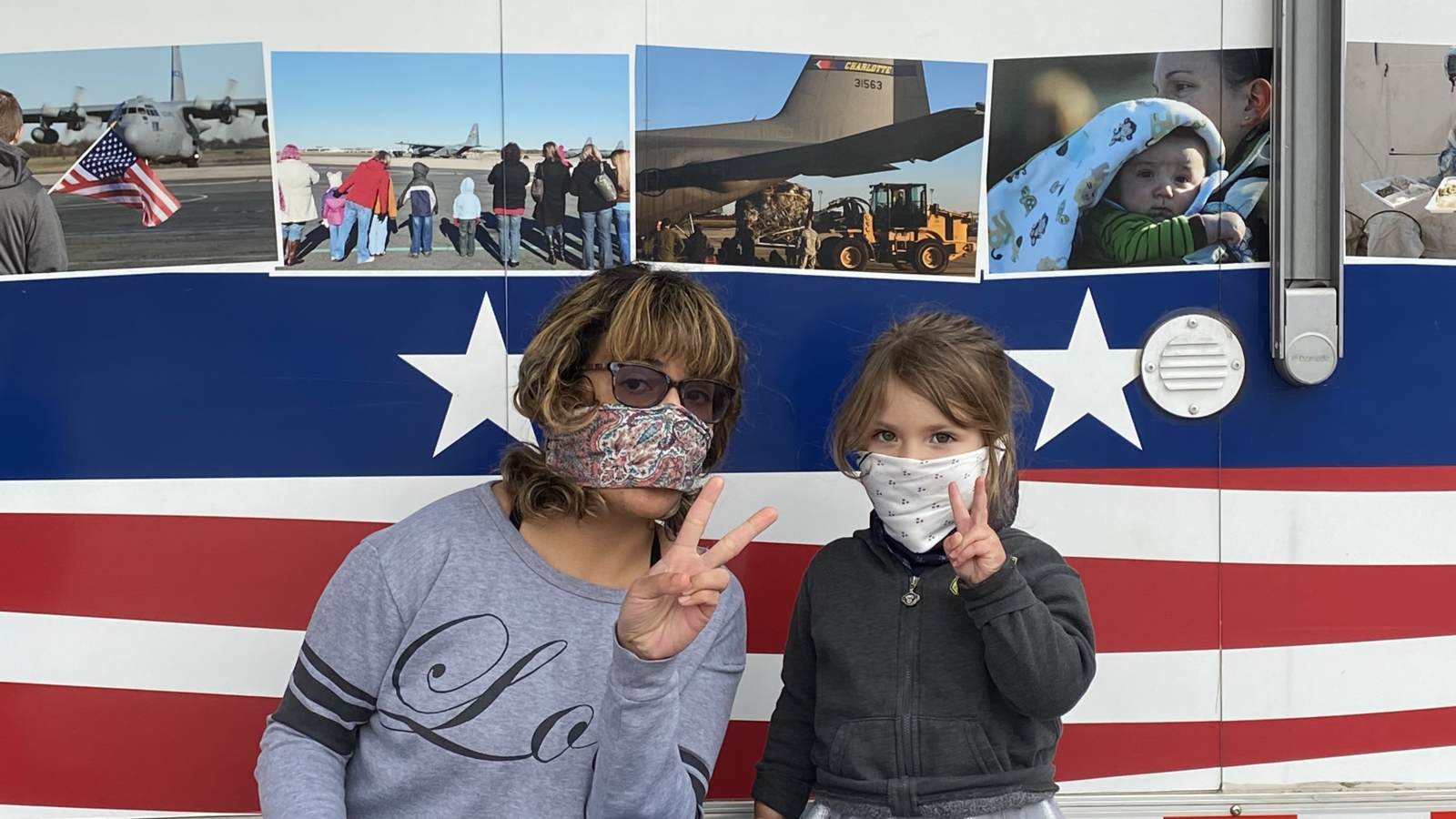 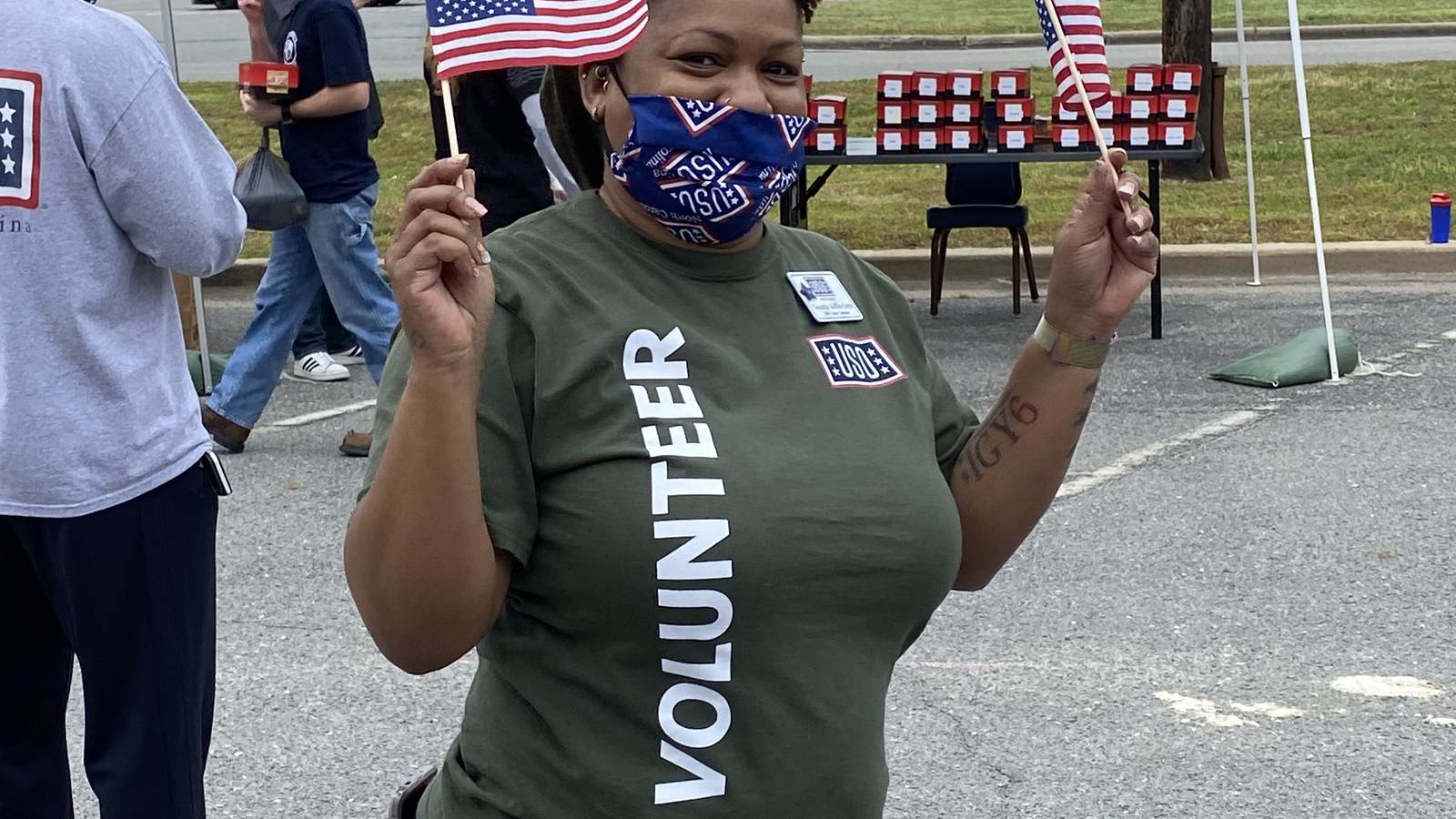 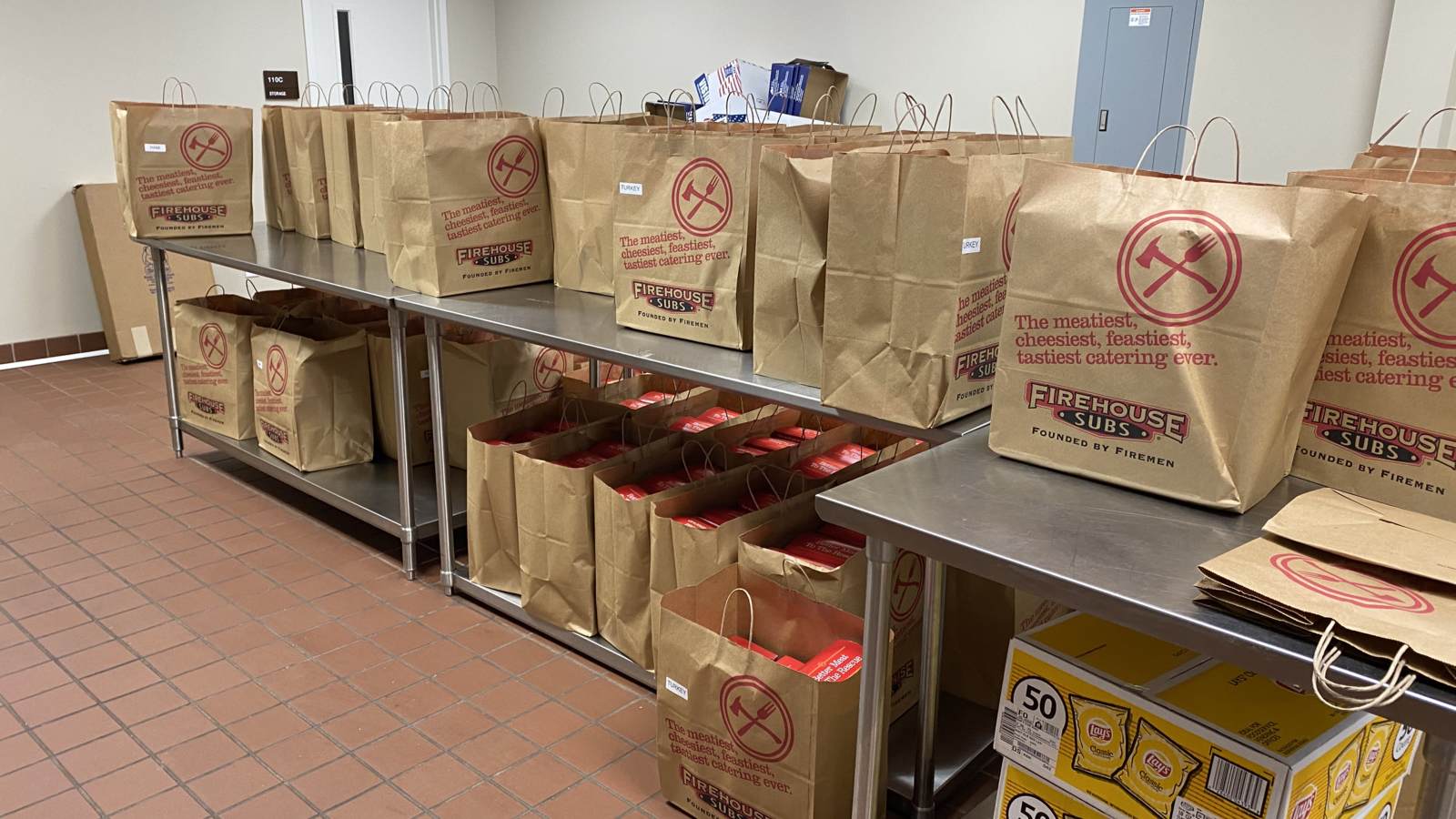 The USO of North Carolina has teamed up with numerous partners and donors, supporting service members on the front lines of containment by providing supplies, food delivery and hope to both military members and their families.

In order to streamline and speed up receiving donations and distributing them, we have created a central distribution center based in Charlotte, NC. Supplies and other vital resources are being gathered and distributed to those places in need both in and out of our state. The space utilized for distribution was generously provided by our valued partner Matrix Frames. Since having acquired space for our operations we have accepted donations from several USO partners such as Matrix Frame, American Airlines, Kind Snacks, Harris Teeter, Lowes Home Improvement, WGU of North Carolina and more.

American Airlines and USO, along with the Gary Sinise Foundation and the Robert Irvine Foundation, donated over 10 pallets of snacks from their operations at Charlotte Airport.

The USO of North Carolina and American Airlines have worked together on many campaigns throughout the years. American Airlines has participated in USO pack builds, provided event space, coordinated deployment homecomings, and more. Relief efforts for our military during COVID-19 is a top priority for both of our organizations and we are honored to have their support.

“American Airlines is tremendously proud to continue our long-standing partnership with the USO of North Carolina in their mission to support the military community across the state,” said Randy Stillinger, Manager of Military and Veterans Initiatives for American Airlines. Stillinger, who’s also a Lt. Colonel in the U.S. Army Reserve and based at the Pentagon, said that “it’s a privilege to use the logistical power of American Airlines to do some good for those who serve our nation, even when our company works to recover from the current crisis.”

In the absence of other transportation options, Julie Milani, Piedmont Area Operations Director, USO of NC Charlotte Center, on her own initiative, rented a 26 ft. U-Haul truck and personally moved the 10 pallets of donated items from American Airlines’ storage facility to the USO of NC distribution center provided by Matrix Frame.

“Nilson Van & Storage is proud to support the military community and the USO of North Carolina. Our logistical expertise and mobility provide a tremendous service for service members and their families, and we want to continue to support them even during these trying times,” said Lakelan Fennell, Senior Vice President at Nilson Van & Storage. “We understand logistics can be difficult right now, and we are honored to team up with the USO, helping transport much need supplies and goods to soldiers and Marines,” added Fennell.

With Marines continuously returning to Camp Lejeune from training deployments, the USO of NC Jacksonville team has been running non-stop, making several supply runs in the past three weeks, where they filled their van with supplies from the Piedmont and Triangle areas, distributing to the Marines at Camp Lejeune.

The USO of NC Fort Bragg Center continues to support the soldiers and families on Fort Bragg, creating an additional supply hub, where they receive donation shipments almost every day. The Fort Bragg Center recently received a large shipment of Powerade graciously donated by Coca-Cola to be distributed where needed. Additionally, the USO of NC RDU Center staff is busy at work. They just received four pallets of snack food items from Operation North State, another military non-profit, for distribution to the coastal area.

Most recently, the USO of NC mobile operations unit ran by Bob Brown, Director of Mobile Operations loaded a 14-foot trailer with five pallets of KIND Bars, and other essential items traveling over 1,400 miles, delivering them to the USO of Fort Campbell and USO Nashville Centers, sharing and redistributing supplies and other resources to the Tennessee National Guard, service members and their families.

“Being able to deliver some USO of NC kindness in the form of KIND Snacks to our USO partners reminded me that although our centers may be closed, our mission to support our military is vital. I am thankful to still be able to do my part during these times,” said Bob Brown, USO of NC, Director of Mobile Operations.

Our mission at the USO of North Carolina is to connect service members to family, home, and country. In doing so, we feel that now more than ever, our heroes and their families need our support. Considering the closures and restrictions we are experiencing throughout the state of North Carolina we have decided to host majority of our events and programs in a virtual setting!

Each day our organization provides interactive content on our social media channels.

Mondays you can enjoy the musical offering of Greg Whitt. During this presentation he will not only show you how to play the instrument but also teach you how to make your own instrument from household items.

Tuesdays at 10am we offer virtual Story Time. Each week we will pick a new book and a narrator followed by an at home craft making session. Be sure to watch the video on our Facebook page and YouTube channel.

Wednesday is “Wellness Wednesdays” with our fitness and nutrition guru, Brad Robinson. Learn how to keep your body healthy and fuel your mind with positive energy.

Thursdays are “Transition Thursdays”, we offer different military transition topics taught by our corporate partners. These topics are intended to help transitioning service members get ready for the civilian life.

Fridays are all about creativity! Be on the lookout for new “Flow Circus” videos with Dawn and Paul. Flow Circus uses juggling and other hands-on exercises to teach audiences a mindfulness framework that enables them to thrive in the messiness of learning, growth, and change.

Operation Social Force is an online game of engagement, fun, and wit to combat the current social distancing climate. Each day throughout the month of April we will post a question on one of the three USO of NC platforms Facebook, Instagram, or Twitter. The person who answers each question correctly and engages with us the most during the month of April will become the Leader of our Social Force and the winner of a “Be the Force” Prize pack!

Forces on The Move invites supporters to put their fitness goals to good use! This is a virtual fitness challenge and fundraiser happening March 30 – June 1. Our organization challenges you to promote physical and mental wellness while showing support for our military.

We are counting the days until we can host our events & programs outside and in person. Until then, please follow USO of NC on Facebook, Twitter, LinkedIn, and Instagram to participate in upcoming virtual events, programs, and webinars from the convenience of your home.