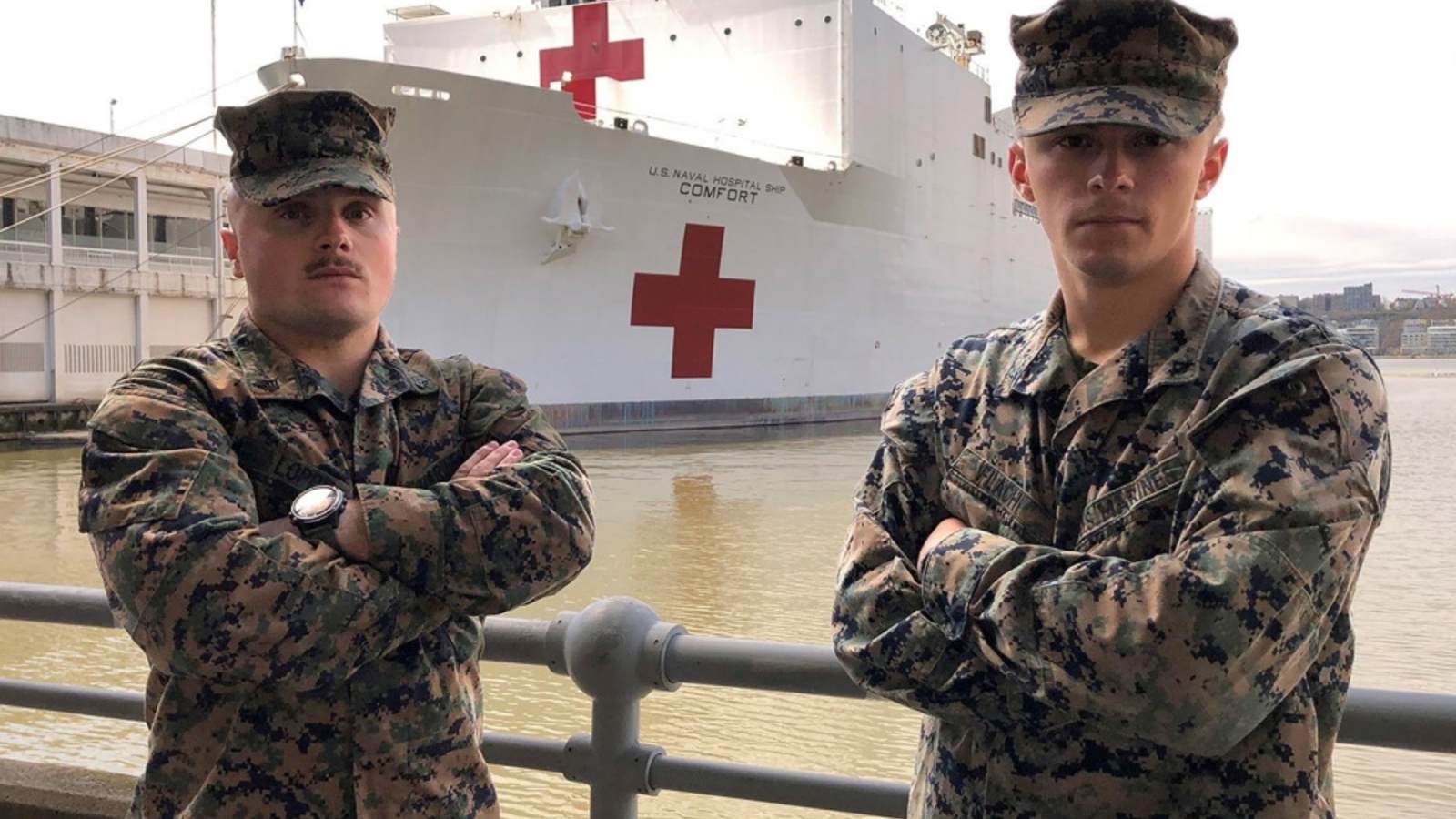 U.S. Marine Sgt. Austin Loppe had just started his shift providing security for Military Sealift Command hospital ship USNS Comfort (T-AH-20) on April 7 when he got an urgent call over the radio shortly before midnight.

A local hospital was undergoing an emergency evacuation and was sending patients in 10 ambulances to the Comfort all at once.

Medical staff aboard the Norfolk, Virginia-based ship are treating trauma, emergency and urgent care patients without regard to their COVID-19 status to help relieve local hospitals that have become overwhelmed with patients because of the coronavirus pandemic.

On a busy night, the Comfort might receive one ambulance every 30 minutes. But there was no precedent for so many ambulances arriving at the same time.

It was up to Loppe and his fellow Marines at the Pier 90 security checkpoint in lower Manhattan to quickly screen each ambulance and manage traffic on the pier so Navy medical staff could bring the patients aboard and start treating them there.

But as one ambulance after another arrived, the Navy-Marine Corps team was confronted with a major problem. The condition of the patient in the fourth ambulance in line was rapidly deteriorating and the patient’s oxygen tank was running dangerously low.

Loppe’s Marines at the checkpoint halted the flow of traffic onto and off the pier so the ambulance could safely maneuver ahead of the others as fast as possible and get the patient into the hands of Navy medical staff a half-mile away down the pier.

Their quick thinking and action likely saved about 15 minutes of time and the patient’s life.

“Us being infantry Marines, we’re all trained in Combat Lifesaver/Tactical Combat Casualty Care,” Loppe said. “You need oxygen to survive. And even just going a couple minutes without oxygen, the human brain starts losing function and having permanent brain damage for life. So that wasn’t something that myself or any of my Marines were willing to let happen to an American citizen. So we knew right away that we needed to get them linked up with the medical team as quickly as possible.”

That wasn’t the only life Loppe’s Marines helped save that night, either. About 10 minutes later, another patient toward the back of the ambulance line was running low on oxygen, too.

Once again, the Marines hustled to get the person in most desperate need of medical care to the head of the line as fast as they could.

“To be able to help New York and Americans in general is pretty awesome,” said Loppe, who is from Mingo Junction, Ohio.

As the security team worked to prioritize entry for the patients in most dire need, they realized other patients in ambulances could also be running low on oxygen. Navy medical staff provided extra oxygen tanks to the Marines who then ran several hundred meters down the pier to the security checkpoint so the Marines could then run them to the ambulances, giving each patient a better chance of survival.

Lance Cpl. Colton Flach, from Green Camp, Ohio, was one of the Marines on the pier that night.

He said the ability of the Marines, Navy and New York police to work seamlessly together helped save lives.

“They’re with us 24-7 on post,” Flach said. “And the moment that we had got that call, I knew that I could count on them to be able to do whatever I needed them to do, and we would do whatever we could to help them as well to get these patients the medical attention that they needed as fast as possible.”

The infantry company the Marines providing security for the Comfort belong to is based at Camp Lejeune, North Carolina and had been training for an overseas deployment when they received orders to go support the Comfort in New York.

Marine Capt. Peter Hofinga is from Rhinebeck, New York and is the company commander of the Marines providing security for the Comfort. He said he was proud of how quickly his Marines adapted to a new challenge and helped his fellow New Yorkers.

“It’s kind of hard to put in words. It’s immensely humbling to observe the Marines and actions that small-unit leaders are making, rapid decisions on their own without any sort of tasking or supervision,” he said. “Despite the fact that this is not really in their typical task group, or what they trained to do, they are able to operate within that friction and chaos to help both the Navy-Marine Corps team overall as well as New York City residents.”

USNS Comfort is currently working with the Javits New York Medical Station in Manhattan as an integrated system to relieve New York City’s medical system in support of U.S. Northern Command’s Defense Support of Civil Authorities as a response to the COVID-19 pandemic.

This story was originally shared on DVIDSHUB.net, and edited for the USO-NC.org