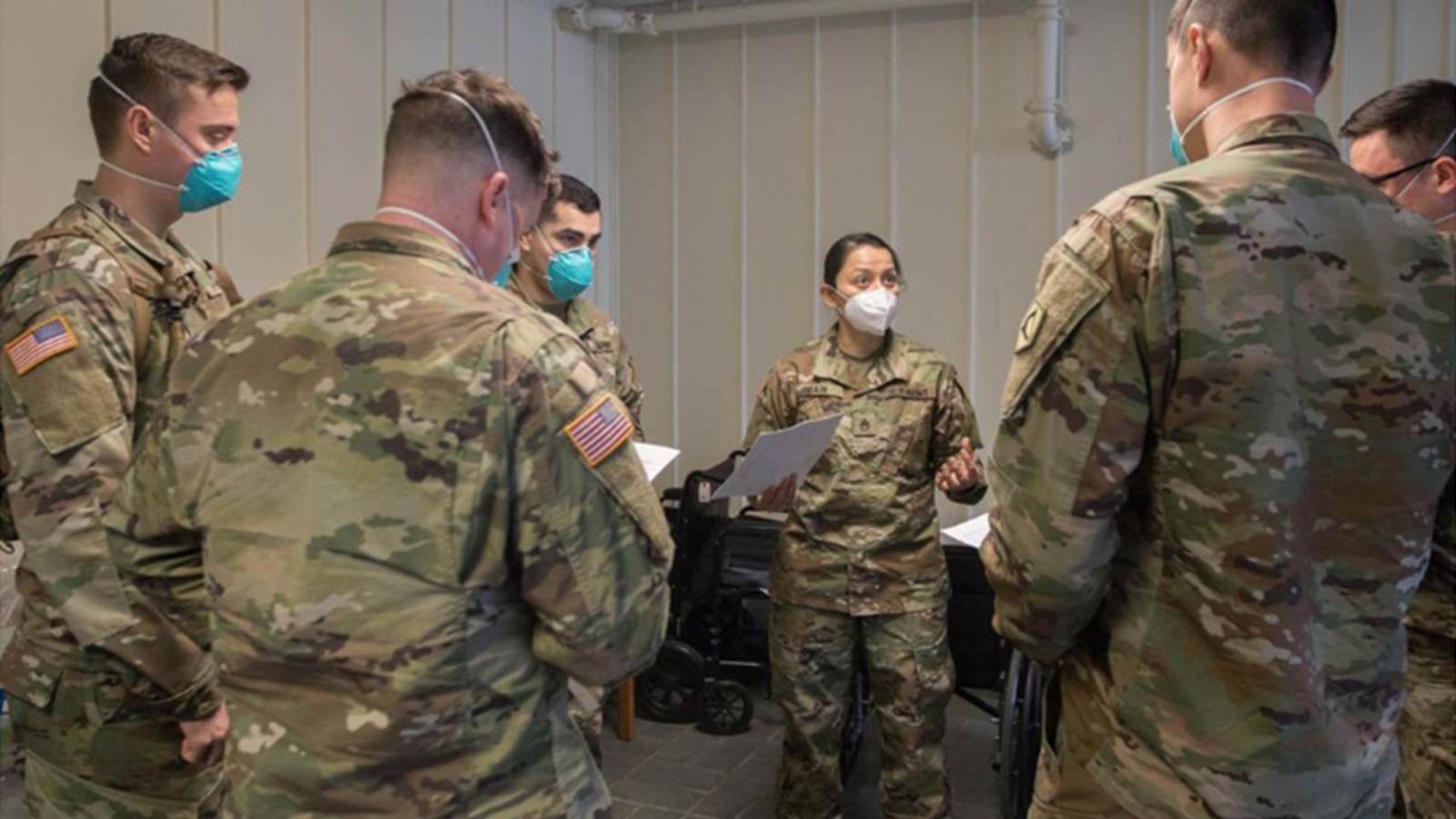 Most of the time, they look just like the rest of us — going to work, picking the kids up from school or working out in the gym. But roughly once a month, or whenever duty calls, members of the U.S. National Guard voluntarily swap their civilian clothes for a camouflage uniform and head to their other job as a citizen soldier or airman. Here, they’ll prepare for the moments when their nation needs them most.

Now, during the COVID-19 pandemic, is one of those moments.

Over the past few weeks, more than tens of thousands of Guard members have been mobilized to assist state and national agencies across the country in the fight against the disease.

True to its motto of “Always Ready, Always There,” the scope, expertise and history of the National Guard has specially equipped it to be one of the United States’ best weapons in the fight against COVID-19.

What is the National Guard’s Mission?

Founded over 383 years ago in Massachusetts, the National Guard was created to help sustain and protect the then-infant colonies. Unbeknownst to its founders, the National Guard would go on to become part of the greatest fighting force in the world, participating in every major U.S. conflict since 1636.

Members of the Army, Marine Corps, Navy, Air Force, Coast Guard Reserves operate on a similar operational cadence, although they have a different, singular mission of providing trained units to the nation as a whole.

How Does the National Guard Get Activated?

There are three different ways National Guard Service Members can be called into service:

1. Each states’ executive leader (typically the governor) can activate National Guard units. In this case, the governor will serve as the commander-in-chief and the state will pay for the cost.

2. The president can federalize the National Guard under Title 10 status. In this case, the president will serve as the commander-in-chief, active-duty officers will command Guard forces and the federal government will pay the cost. This is what happened during Hurricane Katrina.

3. The president can federalize the National Guard under Title 32 status. In this case, each states’ governor will serve as the commander-in-chief (but will answer to the Chief of the National Guard Bureau) and the federal government will pay the cost. This is what is currently happening during the COVID-19 pandemic.

Has the National Guard Helped Before During Crises or Natural Disasters?

The National Guard is no stranger to stepping in to help in times of crises and natural disasters. While the list of moments that the National Guard has been called into action is long and complex, the past few decades are a testament to the force’s nimble nature.

In 2005 after Hurricane Katrina, the National Guard implemented the “largest and swiftest response to a domestic disaster in history,” deploying more than 50,000 troops to areas impacted by the storm. Seven years later, 12,000 guardsmen headed to New Jersey and New York after Hurricane Sandy to help distribute supplies, conduct wellness checks, run patrols, assist the local governments with transportation and more.

Just a few years ago, in 2017 during Hurricane Harvey, thousands of National Guard members headed to Southeast Texas to support the communities recovering from devasting flooding and damage.

“The National Guard is the nation’s first military responder. We are the first to respond and the last to leave,” said Army Master Sgt. Michael Houk in a 2019 nationalguard.mil story.

During a large portion of these national disasters – including recent Hurricanes Matthew, Irma, Harvey, Florence, Maria and Dorian – the USO has deployed right alongside brave members of the National Guard to provide them with moments of comfort and way to connect back home during long days away from their loved ones. From bringing our Mobile USO centers to military staging locations so service members can enjoy free Wi-Fi, to handing out USO snack packs or toiletry kits, the USO is here to support service members when they need it the most.

As the National Guard continues to respond to COVID-19 by deploying all across the country, the USO’s commitment remains the same – to always be by their side.

How is the National Guard Helping Fight COVID-19?

According to a Military Times story, roughly 19,700 National Guard members are currently activated to help combat COVID-19. These brave service members – which span across all 50 states, D.C. and three territories – will help perform a variety of services including:

While communities around the country might start to see more friendly faces in camouflage as the National Guard’s response efforts evolve, the Chairman of the National Guard Bureau, Air Force Maj. Gen. Joseph Lengyel, stressed that this large activation of the military in no way indicates that martial law has or will be declared due to the COVID-19 pandemic.

“Let me be clear. There has been no such discussion,” he said, according to an army.mil story.

“When you join the National Guard, you just want to be able to help your community in times like this,” he said.

How the USO is helping the National Guard

With the U.S. military – specifically the National Guard – increasing its operational tempo in response to the COVID-19 pandemic, the USO has pivoted to support the thousands of service members called into the fight across the nation.

In New York City, which has been hit especially hard by the coronavirus, the USO of Metropolitan New York has stepped in to provide refreshments, hygiene items and fitness equipment to service members in the area. In the past few weeks, the team handed out thousands of beverages, snacks and laundry pods to service members via its mobile unit at Camp Smith and at COVID-19 testing sites and field medical stations.

The Mobile USO team deployed to Florida and Louisiana in support of members of the National Guard. The team is working closely with military leadership and abiding by CDC guidance to continue to deliver classic amenities like free Wi-Fi, televisions, video games, a comfortable chair to sit in and refreshments. The team also supported the USO of Metropolitan New York by dropping off additional supplies all the way from Virginia Beach, Virginia to fuel the continued support of activated service members in New York City. USO’s mobile fleet is postured to deploy across the United States to support National Guardsmen mobilizing as quarantine and medical sites are likely to be established in many states.

While the COVID-19 pandemic is an unprecedented national health crisis, the USO’s support of service members and the National Guard is unwavering. As long as they are serving the nation and their communities, we will continue to find a way to serve them.

-This story originally was shared on USO.org and was edited for USO-NC.org.